From the RuneScape Wiki, the wiki for all things RuneScape
< Beastmaster Durzag
Jump to: navigation, search

Beastmaster Durzag is one of the two Raids bosses that can be fought on Mazcab. He must be fought by a team of up to 10 players and the team must be organised through the Grouping System or they will not be allowed in. 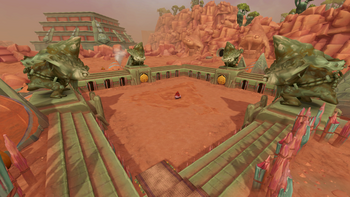 All players are usually recommended to have Dreadnips and to remember to use them as often as possible. Even though they cannot stun Durzag, they still deal a decent amount of damage.

Ideally, all DPS players should be in power armour or void.

Like Vorago, melee can be used but is not recommended as Durzag's melee attacks get area of effect properties that can deal heavy damage when he reaches half health.

Although Dominion Tower gloves like Spellcaster gloves and Swift gloves are very effective at Yakamaru, Durzag replenishes his stats and is thus not impeded by the gloves' weakening spec.

Bring a Guthix staff as a weapon switch for access to the Weapon Special attack Claws of Guthix, a one minute target stacking debuff.

If players own a max cape and/or the Anachronia cape stand, the following capes have the best passive perks for this activity:

120 and Mysterious City mystery. The set below provides damage reduction, increased damage based on missing hp, and increased adrenaline gain. 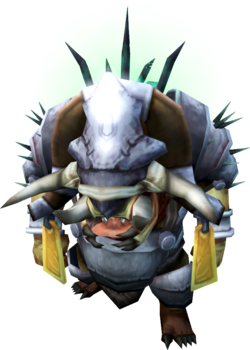 Durzag's attacks include the following: 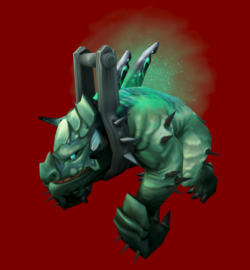 Cormes will always appear from the western gate and has 500,000 life points during the pre-fight phase. Killing it does not cause Durzag to use any abilities, but doing so before he spawns will give him a slight buff. 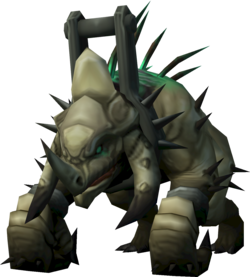 Krar may appear with Durzag when he appears via north gate, and has 700,000 life points. Otherwise, it will appear shortly when Durzag calls it. 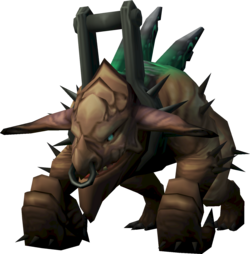 Tuz may appear with Durzag when he appears via north gate, and has 700,000 life points. Otherwise, it will appear shortly when Durzag calls it.

Tuz is always spawned by Durzag saying HEEEEEREEEE BOY!, and a message for whoever he is attacking saying As Durzag is about to summon his pet, he shatters your defences., resetting any active defensive abilities and setting them back on cooldown. The pet that appears will need to be provoked immediately, as it is aggressive and can potentially attack the player while their defensive abilities are on cooldown. If the player tanking Durzag receives a bite during this time, they should immediately call for a provoke. 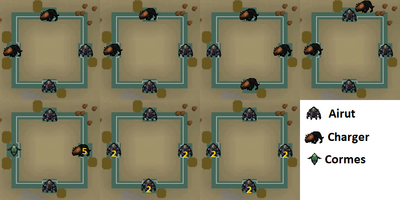 A map with all the monsters and their spawn locations.

To begin the fight, talk to the trapped goebie in the middle of the arena. Once you free him, he will run off to find his friends and they will all come out in panic. A bar above will tell the team to kill 39 Tuska-related units - which are enhanced Airuts (same stats as a normal Airut but hits much harder) - and Chargers which will appear from the gongs that the goebies came out of at the North, East, South, and West points of the pit.

Halfway through the bar (~21 units remaining), Cormes will appear, always from the western gong, and should be tanked by a player standing in the northwest or southwest corner. Chargers will stop appearing after this wave, and are instead replaced with two airuts from all but the northern gong.

Once all 39 Tuska-related units are killed, Durzag will appear in the northeast corner with one of his pets appearing by the northern gong.

When Durzag and one pet appear in the northeastern corner, the arena will be lined up with 20 cages containing Chargers. Chargers can be released and attacked to kill them; it is highly advised to do this immediately, because failing to do so when Durzag hits the gong will result in them all appearing at once and swarming the closest players for stacked melee damage.

Either Tuz or Krar will spawn along with Durzag, with the latter spawning in a random corner later in the fight as Durzag calls HERE BOY!.

Occasionally, the pets will be commanded by Durzag to barge towards the player dealing the most damage to Durzag, often the base tanks, so Provoke is required to maintain their attention. If the pet (which can be stunned or bound) is unable to reach its target for an uncertain amount of time, it will target other players. Players in the way of the pets' barges will be stunned, but will not take any damage. The pets will do high melee damage to all players within 2 squares while barging. Pets that stand closer to Durzag increases Durzag's damage and stats. 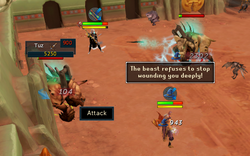 Durzag as well as Durzag's pets and Yakamaru have enraging mechanics, where damage against you increases over time. There are up to 15 enrage stacks that Durzag applies to its main target. One stack is applied every time Durzag uses an auto-attack. Each stack increases damage taken by 6.6% per hit.

Durzag will warn you about increased enrage three times, saying:

Using Freedom halves the number of enrage stacks the user currently has, rounding down. When the message The beastmaster has forgotten his rage on you. appears, Durzag's enraging mechanic on that player is reset to 0 stacks. But like Yakamaru, Durzag's enrage increases faster than the base tank's Freedom goes off cooldown, so tanks will always have some level of enrage on them unless Durzag is provoked onto another player and is not facing an enrage recipient for an extended time.

Also, Durzag can sometimes lose interest towards the base tank and start attacking another player. The base tank should immediately provoke Durzag back on him if this occurs. This happens much less often than the pets barging away.

At 750,000 life points, Durzag becomes invulnerable to standard damage, so Tuz and Krar must be killed to remove his invulnerability. Killing each of them will cause Durzag's damage to increase by 75%. On top of this, Durzag himself gains the ability to bite his main target and make them take increased damage with each stack of the bites.

Chargers can be dealt with directly by the players or indirectly from Durzag's attacks during the enrage phase; damage must be piled quickly to ensure that the kill will succeed should Durzag kill a player in one hit. Thrown bombs will deal the same amount of damage the player would take to nearby Chargers, while a ground punch by Durzag will deal 4,470 melee damage on them. Devotion is helpful to reduce their attacks while focusing on Durzag.

Although his ranged attacks do not seem to increase and stays the same throughout the whole fight, his melee attacks will hit much harder even without enrage stacked on it, capable of dealing 7,000 damage without any damage reduction per attack. Players who stay angled away from Durzag can be easily recover health through Soul Split (be careful if using it) or from healing items.

The Portent of death does work against Durzag, and can be used as a last ditch option if there are few players left and Durzag himself has low health.

After the Fight[edit | edit source]

Players can loot Durzag's corpse or collect from Fetcher outside the instance (lobby or leave the group to leave instance). One random entrance in the walls of the arena will take you north-east to the canal access tunnel, leading you to the canals and Yakamaru. Players hunting Achto armour pieces that unlocked the ability to reroll the loot often do not loot Durzag immediately after killing him, but instead kill Yakamaru, reroll, then loot Durzag from Fetcher. This is because Yakamaru has an increased drop rate of Achto compared to Durzag. If a rare is received without rerolling from Yakamaru, the reroll may be used for Durzag.

Players who are offline prevent the owner from changing the boss to Yakamaru. Queueing the team or removing matchmaking requires the entire team to ready up to complete the team. Therefore, it's highly recommended to kick offline players and start the Yakamaru instance, only reinviting players and filling open group spaces after the instance is accessed.

There are 5 special challenges that progress towards "the Daredevil" title. In order to complete the feat, the challenge described must be met AND players must finish the kill.