All Fired Up (minigame)

From the RuneScape Wiki, the wiki for all things RuneScape
(Redirected from Beacon Network)
Jump to navigation Jump to search
For the quest of the same name, see All Fired Up. 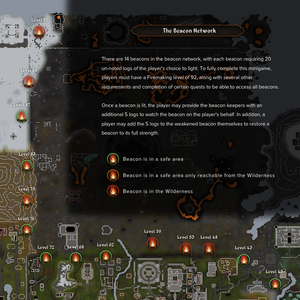 All Fired Up (sometimes simply called the Beacon Network) is a minigame released on 26 August 2008. The goal of the activity is to light a series of beacons, a concept initiated by King Roald III to make use of fires as a warning signal in the event of an emergency.

In total, there are 14 beacons in the beacon network, with each beacon requiring 20 un-noted logs of your choice to light. To fully complete this minigame, players must have level 92 Firemaking (or 90 with the god banner boost), along with several other requirements and completion of certain quests to be able to access all 14 beacons. If the player is opted into PvP, they will receive a warning prompt about it when attempting to enter the Wilderness from any beacon within or next to the Wilderness.

Players may partially complete the minigame without fulfilling all requirements, they will still receive the rewards according to the progress they achieved in the minigame. Players looking for alternative methods for training Firemaking should not be intimidated with all of these requirements. See the Network information section below for the individual requirements for each beacon.

Note that players must reach the skill requirements themselves, as player assisting will not allow players to access these beacons. Boosts, however, could be used to light beacons.

The following requirements are needed to light all fourteen beacons to gain all three rewards in the minigame. It is also the requirements of My Adze is Bigger Than Yours.

The list does not include the logs used to fuel the beacons. See the strategy of Lighting the beacons for further information.

For beacon keepers to watch after the beacons, here are some extra requirements to unlock them. It is also the requirements of I Can See For Miles and Miles.

Player may use log storage boxes to keep logs or exchange noted logs for lighting the beacons faster and smoother. It requires players to complete the Varrock Elite achievements to be usable.

One of the achievements in the group related to the minigame is It All Adze Up, which requires

Travelling between beacons by simple running takes time. It also has a risk that the beacons run out of fire during the travel, so the players may miss a chance to obtain rewards. Teleportation and items keeping run energy would help players to travel faster to shorten the travel time.

Players may use magic tablets to alleviate the actual requirement of Magic level, however, relevant quests are the sole requirement.

There is a beacon in a bad environment near the God Wars Dungeon entrance reducing the players' overall stats.

To start the minigame, you must have completed the All Fired Up quest; one of the rewards from the quest is access to the beacon network.

The objective of the activity is to keep as many beacons lit at the same time as possible. There are a total of 14 beacons in the beacon network which are indicated on the world map and minimap by the Fired Up Beacon icon (

On the basis of the number of beacons kept lit at the same time, the rewards are broken into three groups: 6 beacons, 10 beacons, and all 14 beacons. Players can obtain all three rewards in a single trip, provided they have 92 Firemaking. To get the rewards, players will have to speak with King Roald III in Varrock Palace.

Before making an attempt to the activity, the following must be done to eliminate waste of time:

To light a beacon, the brazier must first be filled with 20 unnoted logs of the same type. Any types of logs, which are able to light, may be used. The better the logs, the longer the beacon will stay alight. 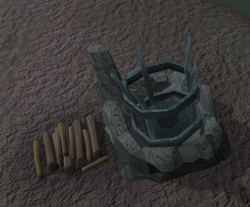 It may be useful for players to use maple or yew logs for most beacons if they want to save expenses or effort to gather the required logs, especially if they are using the network to gain experience rather than trying to earn the rewards.

Below is an estimated time for how long each type of log burns:

It is possible to light all 14 beacons using only regular logs; the entire network may be lit in as little as 7–9 minutes.

There is one box next to each unlit beacon, and each one is capable of holding 60 logs. With 20 logs also stored in the beacon itself, this allows for each beacon to be lit four times before needing replenishment. Addition and removal of logs from the chest can only be done in amounts of 20 logs, which is the amount needed to add to the beacon. Logs can be placed in the chest in noted form, but can only withdrawn in item form. Therefore the players may hold the noted logs to exchange required amount of item form of logs added to the beacon.

The chests only accept the following types of logs. The players can use elder logs in the minigame but not put in the chests.

The tune that plays when all 14 beacons are lit.

Friends may also help in this minigame to save repeated trips to the bank - a player provides an inventory of logs to some friends and asks them to wait at the beacons. Once the player arrives at a beacon, the friend trades the logs with the player for the next beacon.

Players may save money by using cheaper logs on the beacons that will be lit last. The difference in burn times of magic logs and maple logs is relatively minor, but obtaining the first may be either much more expensive (if you are buying logs), or more time-consuming (if you are cutting them).

Using the salt-water spring after completing As a First Resort, or other replacement will give you unlimited run energy for a temporary period of time, increasing your chance of success/save you money from buying energy restoring items.

Players who don't have access to Trollheim teleport can use the games necklace teleport to Troll Invasion and run along to the beacons near the Trollheim hill. However, this takes a relatively long time and it is therefore recommended to light this beacon first, if using this method. 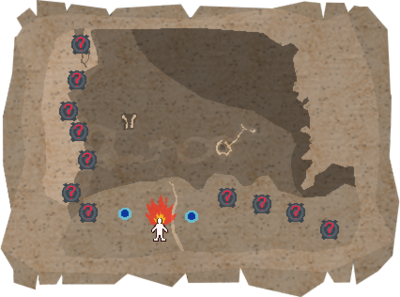 To keep track of the status of the beacon network, players can:

The icons on the map have the following meanings:

The beacon network is made up of 14 beacons along the borders of the Wilderness. Each of them require a certain Firemaking level to light, while some may require additional quests and skills. Some of the beacon keepers may run errands, request gear, and require quests to be completed.

To show the benefits from the rewards of the minigame while doing normal Firemaking.