A beach ball is a reward that could be won from the Squeal of Fortune. It is also obtainable from a beach ball token, received through activities during the Summer Beach Party or purchased through Sheldon for 10 RuneCoins. 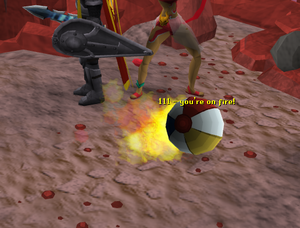 A beach ball on fire

After it has been kicked 100 times, the ball catches fire and becomes a Flaming beach ball. With each new kick past 100 it counts up with the message You're on fire!; e.g. 100 - you're on fire!