Battle of the Monastery 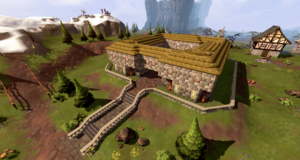 The Battle of the Monastery is a battle depicted in the first RuneScape novel, Betrayal at Falador. The battle was the first open military conflict in the War of 164, and ended in favour of the Kinshra and their allies.

A group of adventurers consisting of Kara-Meir, Arisha, Squire Theodore, Castimir, Doric, Ebenezer and Gar'rth, journey to the Monastery. Where they meet Abbot Langley, and other monks who perform an exorcism on Gar'rth in the hope that it will cure his lycanthropy, this fails but does result in him being able to control it.

Lord Sulla with a small army of Kinshra soldiers plans an attack on the Monastery to test out his war machinery. In a nearby wood they meet a Jerrod, a werewolf who is tracking Gar'rth. They agree to team up.

The Kinshra then launch their attack on the Monastery, using Chaos Dwarf mortars designed to cause walls to crumble. Kara-Meir, Gar'rth, Squire Theodore, The Alchemist (Ebenezer), Castimir, and Doric hide in a bedroom. They then go outside and fight the Kinshra foot soldiers that have just arrived. A struggle commences where Jerrod attempts to capture Gar'rth, Kara-Meir gives Theodore her adamant longsword and he starts fighting, however Jerrod grabs the sword and throws it to Sulla. Jerrod also throws Castimir's rune pouches into a fire, so Castimir picks up some runes lying around. Castimir uses Snare on Jerrod and together with Theodore and Doric they lifted him under a collapsing wall. Kara-Meir and Gar'rth end up trapped in the Monastery due to a cave-in. The surviving monks along with the remaining visitors escape the Monastery, fleeing toward Edgeville and Falador. Ebenezer gives Castimir a sack of runes, before Doric, Castimir and Theodore begin the return journey to rescue the trapped Kara-Meir and Gar'rth.

Kara-Meir and Gar'rth are discovered by the Kinshra, they attempt to recruit Kara-Meir to Zamorakism through the use of an emissary of Zamorak. When this fails Kara-Meir is brutally beaten by Lord Sulla. Gar'rth is also beaten and insulted by Jerrod in an attempt to get him to return to his wolven nature. When this fails they use Kara-Meir as bait, tying her to a support beam, with Gar'rth being forced to transform. However he refuses to kill her, while the spectating black knights impatiently throw rock debris.

Doric, Castimir and Theodore return and ambush the Kinshra. With Castimir using fire strike to disorientate them allowing Kara-Meir and Gar'rth to free themselves from their bonds and together they flee the Monastery. In the ensuing chaos most of the horses were loose leaving Sulla and the Kinshra unable to pursue the fleeing adventurers. Theodore also manages captures a low-ranked Kinshra officer, named Gaius. Then Castimir lights an unlit wall crumbling cannon ball that Ebenezer gave him. Castimir uses Snare on Jerrod and puts the cannon ball under Jerrod, waiting for it to blow up, in an attempt to repel him. Sulla saves Jerrod from the blast.

The adventurers return to Falador to inform Sir Amik of the Kinshra's plan and deliver their prisoner Gaius. The Kinshra also leave the Monastery.