Battle of the Archipelago

The Battle of the Archipelago was a major battle that occurred somewhat recently, in the modern Fifth Age. It was fought primarily between the united pirates of the Eastern Sea and the fleet of Captain Rabid Jack in the Cursed Archipelago.

Rabid Jack had, for years, been one of the most powerful pirates to dock in Mos Le'Harmless. Though his brutal methods were a cause for concern to some of the pirates, they reluctantly allowed him to remain, as he was capable of fending off the port's many enemies.

Jack, however, wanted more influence in the Eastern Sea, and launched a massive attack on Mos Le'Harmless. Using his ship, The Scourge, he was able to cause significant damage, but was ultimately repelled and defeated. As he retreated to the south, he renamed his ship This Albatross, saying that it would be a curse upon pirates forever.

Jack, having secretly found a new base of operations in the Cursed Archipelago, used his ever-growing fleet to prey upon merchant, customs, and pirate vessels throughout the Eastern and Southern Seas. Though the pirates of Mos Le'Harmless attempted to stop him, their attempts were futile and ultimately failed.

The Customs and Excise Office, who had formerly had an uneasy alliance with the pirates, now declared them enemies, and began a mass anti-pirating campaign that would leave many dead or imprisoned in the Rock Island Prison off the coast of Karamja.

The united pirates, realising that they could not deal with both the Customs Office and Jack's fleet, amassed their forces under Gentleman Mallard and travelled to the Cursed Archipelago, a chain of small islands said to be surrounded by dark magicks.

All reports indicate the Battle of the Archipelago was massive in scale, although details are scarce. Although Jack's fleet was initially camped in the Archipelago, they were able to respond quick enough so that many of their ships were prepared for combat by the time the pirates of Mos Le'Harmless arrived. 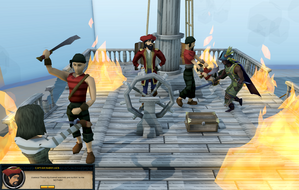 Rabid Jack stands amongst the heat of the battle.

The battle ultimately became focused on gaining This Albatross, where Jack and some of his strongest crew were locked in combat. Fighting alongside his bosun, Giles, Jack repelled the enemy even as his men were killed and This Albatross became engulfed in searing flame.

When the united crews of Bill Teach, Cap'n Izzy No-Beard, and others were unable to get to Jack, Brass Hand Harry's crew created a plan. Young Ralph, one of Harry's artillery men, fired a cannon at the distracted Jack. His bosun, Giles, took the cannonball in the stomach, instantly killing him. Jack was hit with the debris from the explosion, severely wounding him. 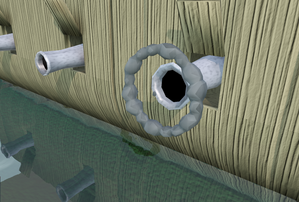 Jack, on the brink of death, grabbed a box with unknown contents from the deck. Standing on the ship's railings, he declared the sea would never let him die, and that he would return. He then leapt overboard and sank to the depths, where he presumably died.

Jack's remaining fleet fell quickly without its leader. Every last one of his men that did not escape was executed, their bodies disposed of in the Archipelago. Jack's body, however, was never found, and any that were sent into the sea to retrieve it never returned. 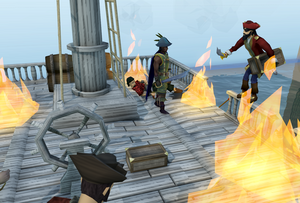 Jack jumps off his ship

Mallard and the rest of the surviving pirates then left the Archipelago, and since then are believed to have avoided it at all costs. Those that survived largely tried to forget the ordeal, and the very mention of Jack's name today will sometimes draw violent responses from pirates.

The Customs office, though their persecution of pirates eased very slightly, never re-created their alliance, and today they continue to fight against them at every opportunity. The Rock Island Prison remains in service even to this day.

Many of Jack's pirates killed during the battle returned soon after as the undead. Today they have begun a renewed attack on the Eastern Sea, and some believe Rabid Jack has returned. More information is found over the course of the pirate quest series.

There is little documentation of those present at the battle, and as a result these lists are largely incomplete thus far.

A "† " denotes the ship or individual was destroyed or killed during the battle.

Note: Many of the dead crew were renimated and returned as undead after battle.