Battle for the Ritual Site

The Battle for the Ritual Site is the unofficial name given to a large battle in the North that took place in the second millennium of the Gielinorian God Wars.[1] It broke out when a Saradominist army attacked that of the monstrous general Nex, who was aiming to secure the Mahjarrat ritual site in the name of Zaros. Though outnumbered, the Zarosian forces were more powerful than the Saradominist ones.[2] 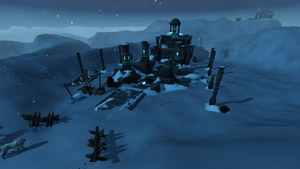 The Temple of Lost Ancients, erected after the battle.

Eventually, however, Nex and her army were lured into an icy cave because she was deemed undefeatable and the Zarosians were locked inside the prison, ending the battle. Afterwards, the Temple of Lost Ancients was built over it to mark Saradomin's victory.[2]

Over three millennia later, the area would become the site of the Battle for the Godsword and Nex would be released from her prison due to the involvement of the Zarosian Mahjarrat Sliske before being imprisoned once more by a joint effort of four warring gods. In 169 of the Fifth Age, tectonic activity caused the temple, which had been frozen by the Guthixian mage Aeternam during the god of balance's campaign to end the God Wars, to thaw, once again unlocking the Ancient Prison.