From the RuneScape Wiki, the wiki for all things RuneScape
< Barrows
Jump to navigation Jump to search
The Old School RuneScape Wiki also has an article on: osrsw:Barrows/Strategies

65+ combat
It is recommended to have at least level 65+ in your chosen combat style (Attack & Strength, Ranged or Magic).

65+ Defence
It is recommended to have at least level 65+ Defence.

Hybrid armour
Use hybrid armour like Warpriest, Akrisae or Sliske anima core as you need to switch between all 3 combat styles for this fight.

ranged switches because each brother is weak to a different style. At least tier 70+ weaponry is recommended.
Optional boosts

Undead slayer
This boss is an undead creature and undead slayer effects provide additional damage against it. 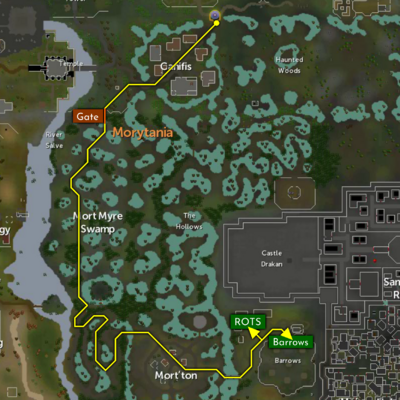 Path to get to the Barrows brothers from the Canifis lodestone.

Completing the Barrows minigame involves both defeating the brothers and traversing the underground tunnels to loot the rewards chest.

While underground in the barrows, an unnatural energy will continually sap the player's prayer points every 18 seconds or so. This drain starts at 80 points and increases by 10 for every brother/sister killed, up to 160 prayer points in total. This is usually indicated by one of any seven defeated brothers' faces (Linza does not count as an appearance, but will contribute towards the prayer drain), although not killing any brothers still causes the same effect. Therefore, try to minimise the time spent in the crypts or catacombs to reduce the amount of prayer drained. If the player has completed the hard set of the Morytania achievements, the prayer drain effect is cut by 50%.

Dig on top of the crypts to enter them. The brothers are summoned by investigating their sarcophagus within the crypt; when disturbed, they will spawn and immediately attack the aggressor. They may only be attacked by the player who summoned them. If the brother is not killed when the player leaves their crypt they despawn and must be summoned again, returning with full health. However, if the brother is dealt a fatal hit just as the player leaves, then the kill will still count. Each brother defeated will be listed in the bottom left corner of your screen.

For maximum loot potential, each brother must be killed before looting the chest. 5 of the brothers (or 6 after completing Ritual of the Mahjarrat or Kindred Spirits and 7 after completing them both) will be at rest in their crypts. The last brother (chosen from any brother except Linza) will not be found in their crypt and will instead be lurking about in the catacombs. The last brother's sarcophagus will lead to the tunnels below and he will be fought there. Recommended kill order:

Lower-levelled players should focus on using armour switches to have the best hit chance and defence against each brother's attacks. If you are struggling then focus on using switches only for the chest and legs slots. Hybrid armour could also be used instead of armour switching but this is not advised as it does not provide the same damage bonuses as power armour. Abilities such as Debilitate and Anticipation can be used on any brother to reduce damage taken for a period of time. Offence-wise, it is recommended to only use basic and threshold abilities. Even at a low level, these fight should not be long enough to warrant the use of damage boosting abilities such as Sunshine, and almost every damage-dealing ultimate (such as Omnipower) do not deal enough damage to warrant their use. Saving adrenaline near the end of the fight will also allow you to use Regenerate to recover lost life points.

Bringing nature runes to use either Entangle or Snare (79 and 50 Magic respectively) to bind the melee-using brothers is also recommended. If done properly, you will not need to use any food as they will probably not get the chance to attack. Simply cast the binding spell on the brother then step away and continue fighting. Be mindful of how long your bind lasts (entangle lasts 24 seconds; snare lasts 18), and be ready to cast the spell again when the effect ends.

The order in which the brothers are killed may make a difference to some players. When choosing an order, it is important to consider how each brother may affect the future fights. Low-levelled players should ignore Linza and Akrisae if they're available as they will unnecessarily prolong loot times. 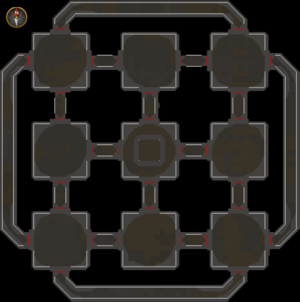 A map of the tunnels

Searching the last sarcophagus will lead to some catacombs below the crypts. The map is a 3x3 grid (each room being 1x1) and a narrow path on all four cardinal directions. Upon entering the crypts, you will appear in one of four corners in the 3x3 grid. One of the four doors can be interacted with, while the other three remain sealed shut and cannot be opened at all. A randomly generated path is set to the centre of this grid where the chest is lying, ready for the taking.

There are monsters in the centre of the edges of this 3x3 grid:

Killing the monsters adds to "creatures killed", which increases the drop rate of various items like dragon helms and crystal key parts. They do not affect the drop rate of barrows equipment. The maximum potential one can achieve is by killing the crypt monsters until the sum of their combat levels equals 1000. Players with at least level 70 stats and equipment should be able to increase their killcount quickly by using multitarget abilities. The exact equation that is used is explained more here.

Each time a door is opened, a monster will appear and attack the player immediately, consisting of either a bloodworm, normal crypt rat/spider or skeleton. If any brothers haven't been defeated yet either, they also have a chance of ambushing the player as they pass through the door. This only occurs to brothers whose sacophagi can access the crypts.

The door that leads to the final room containing the loot chest has a lock that must be disarmed by solving a simple puzzle. There are four possible puzzles, each with 2 incorrect solutions and 1 correct solution. The solution to a puzzle is always the same. The interface that shows the puzzle may be interrupted by combat. Monsters will not be aggressive when you are standing right in front of the door, so kill anything that is attacking you before attempting the puzzle.

Solving the puzzle correctly will open the pathway to the centre room. Providing an incorrect solution will lock you out of that path and shuffle the path.

In the final room is the chest containing your loot. Investigating the chest will open it and spawn the brother whose tomb was used to enter the crypt. If that brother was defeated while traversing the tunnels, no brother will spawn to intercept the player, even if they haven't been defeated yet.

The chest may be looted at any time, even before the final brother is dead; however, doing so will prevent that brother's items from being added to the loot table. It will also not count towards the Beasts tab/soul reaper (unless the brother who was spawned was Akrisae).

Rewards in the chest may be collected into the inventory. Completion of the hard Morytania achievements will double the amount of runes obtained from the chest and allow the loot to be banked from the chest. Having a luck enhancer equipped when you loot the chest will not affect Barrows or rare items; instead, it adds an extra table in the drop rolls. This table has a chance of adding an extra item to your reward chest. It is highly recommended for all players to simply teleport out of the tunnels once they have looted the chest.

After the chest has been looted, your screen will begin to shake as the tunnel collapses. You will begin to take damage at short intervals if you stay inside the tunnel. You have two options: teleport out, or traverse the maze again to the room you entered from and escape via the rope.