If lost, it can be re-obtained by talking to the monk, Brother Tranquility, on Mos Le'Harmless to receive another broken anchor which can once again be fixed by Smith for 230,000 coins. The book o' piracy is required in order to communicate with Smith unless the player has completed the Rocking Out quest. 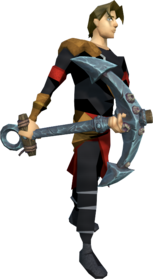 The Barrelchest anchor's special attack is Sunder, which costs 50% adrenaline. This is an attack with increased accuracy that deals 75-150% weapon damage and randomly reduces the target's Defence, Attack, Ranged, or Magic level. In addition, if Defence is chosen, the target's affinity values are increased by 4 for 1 minute.