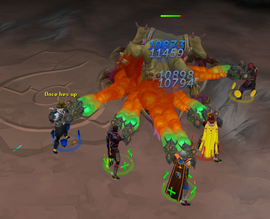 Barbarian Assault hard mode is unlocked permanently upon playing through all 10 waves of normal mode, killing the Queen one time. After doing so, simply right-clicking a recruitment scroll in the staging area for Wave 1 will let a player select to activate hard mode. Hard mode can only be activated from the first room, but can be deactivated (at the cost of any progress) in any wave's staging area. 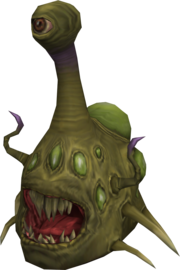 Watch out, they're poisonous!

Having killed the Queen once already, players will be familiar with the tactics involved in going through the first 9 waves of hard mode. There are three crucial differences in hard mode's gameplay. The first is that there is more of every Penance — about 50% more. The second is that the Collector starts out with three eggs of each colour; green eggs should be fired at the Attackers and Defender at the very beginning. The third difference is that the Penance Runners, when they die or eat the wrong bait, explode, hitting anyone within a 5 square radius for 20% of their maximum lifepoints — this can be lethal to the Defender when there is a stack of runners desperate to eat the bait on the trap! Refer to the strategy page for normal Barbarian Assault for further tactics to complete the first 9 waves of hard mode.

Wave 10 of hard mode is a different story. The two egg launchers are recessed into the southeast and southwest corners of the arena, providing no cover in the arena. After the call changes 12 times (6 minutes), during which the regular penance are taken care of, the Penance King spawns, chasing people and hitting anyone within melee distance for 25% of their maximum life points. Alongside the King are spawns that explode at players, also damaging them for 25% of their maximum life points. Players must feed poisoned meat from the dispenser on the west wall of the arena to the King, causing him to vomit up items. Once five of these items have been regurgitated, Defenders, Attackers, and Collectors must take them and process them on the east wall (Volcanic vent for Defenders, Anvil for Attackers and Collectors), while the Healers use theirs on the acid pools spewed by the king.

Once all four roles have deposited the processed flamethrower parts on the west wall, players take their flamethrowers. Then, attacking the King will make him drop a scroll. Upon inspecting this scroll, players will see written one of five words: Exuro, Labefacto, Debilito, Flamma, or Ignis. At this time, all five words will appear on each player's screen. The words must be called in the correct order (a word will become silvered out when correctly called) to render the King temporarily vulnerable to the flamethrowers. After a time, the King will escape from his vulnerability, damaging players within 4 squares for 33% of their life points. He will also now hit even more of player's life points as he becomes more and more enraged. This "scroll-and-toast" process must be completed twice more to finish off the King.

Note: You must choose Honour points or Experience before each wave starts, or you will continue to receive the same reward type as the previous wave.

Hard mode yields far more bonus experience and Honour points than normal mode. Killing the King by himself rewards the player with 210 points in the role they played and 15 points in each of the other 3 roles, as well as an Insignia recharge. If the player chooses to be rewarded with bonus experience, a King kill will result in hundreds of thousands of bonus experience in the chosen skill. 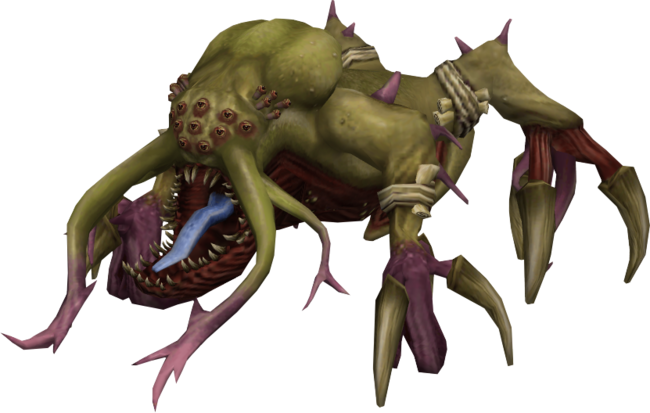 Cacus, King of the Penance