From the RuneScape Wiki, the wiki for all things RuneScape
Jump to: navigation, search
The Old School RuneScape Wiki also has an article on: osrsw:Banner (Horse)
Banner? (edit)

A Banner is a decorative flag made on a banner easel in a player-owned house with the symbol of the mythical 'horse'. They can be created at 48 Crafting with 1 plank, 1 bolt of cloth, and the appropriate crest assigned by Sir Renitee. Players must have a toy horsey in their inventory in order to make the horse banner. Sir Renitee will not assign a crest unless the player has over level 16 Construction. Players can use a Banner easel in another player's house if they do not have one. 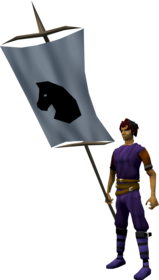