From the RuneScape Wiki, the wiki for all things RuneScape
Jump to: navigation, search
The Old School RuneScape Wiki also has an article on: osrsw:Banner (Arrav)
Banner? (edit)

A Banner is a decorative flag made on a banner easel in a player-owned house with the crest of Arrav. They can be created at 48 Crafting with 1 plank, 1 bolt of cloth, and the appropriate crest assigned by Sir Renitee. Players must have completed the Shield of Arrav quest in order to make the Arrav banner. Sir Renitee will not assign a crest unless the player has over level 16 Construction. Players can use a Banner easel in another player's house if they do not have one. 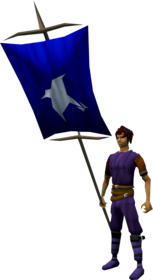