From the RuneScape Wiki, the wiki for all things RuneScape
Jump to navigation Jump to search
The Old School RuneScape Wiki also has an article on: osrsw:Bank chest
Bank chest? (edit)? (edit) 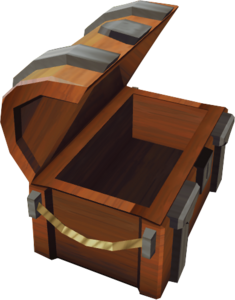 A bank chest is an interactive scenery item that allows quick access to a player's bank account, usually found in remote locations or places where a normal bank would not fit. Like any other banking facility it is indicated with a bank icon (

). Selecting "collect" on the right-click menu allows a player to access Grand Exchange offers and the lent items box.

Bank chests can be found in the following locations: