From the RuneScape Wiki, the wiki for all things RuneScape
Jump to: navigation, search
The Old School RuneScape Wiki also has an article on: osrsw:Bank booth
Bank booth? (edit) 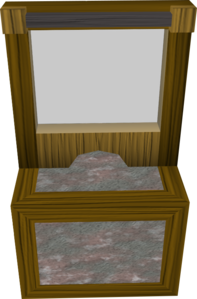 As of the update on 31 January 2012 players may now quickly use a bank booth with two new options other than a "use quickly" option. The other option, as of 31 January 2012 is the same collect option as before. This facilitates players training "bank skills" such as Herblore and Fletching.

The update history project is a work-in-progress – not all updates to this topic may be covered below. See here for how to help out!
Retrieved from ‘https://runescape.wiki/w/Bank_booth?oldid=34730779’
Categories:
Hidden categories: