From the RuneScape Wiki, the wiki for all things RuneScape
Jump to navigation Jump to search
This article is about the second beta for the weapon diversity update. For the first beta, see Weapon diversity beta.
[view] • [talk]

The Bank Placeholders & Weapon Diversity 2 beta is a beta version of RuneScape that was used to test two main subjects: changes to the bank to make using it much more convenient, and a follow up to the weapon diversity beta with changes to more weapons to make them more diverse.

The player's game save can be copied into the beta once every 60 minutes.

The beta is based on the live game update of 22 July 2019 (and thus does not contain the Summer Skill Off content).

The beta ran from 31 July to 10 September 2019. The bank features were updated and the beta was launched again on 17 September as the Bank Placeholders and Improvements 2 beta. The weapon diversity changes were cancelled (see Update:An update on Weapon Diversity).

The bank has been improved with several new features and updates:

A developer blog was released on 1 August 2019 describing some of the process of implementing the improvements. 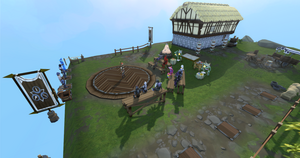 The Combat Academy instance during the beta

Players can find training dummies in the Combat Academy in Lumbridge to test weapon effects on. Speaking to Lady Deathknell allows players to access an instanced version of the Combat Academy without other players, where she will also instantly revive you should you die. There are a number of shops nearby with free items.

Max can also be found in the Combat Academy, giving players 2736 total level. Max also provides a gizmo picker interface, to be able to create a gizmo with any combination of perks.

For daggers, each hit of both autoattacks and abilities can trigger it; for abilities, the extra damage is always equal to a main-hand auto attack; when triggered the main-hand animation is always played, even if it is triggered by an offhand dagger autoattack and deals offhand damage.

For spears, Dismember and Slaughter deals 7 hits instead of 5 (40% damage increase). Normally, Blood Tendrils does one hit against the enemy then 4 hits that each deal half as much damage, but with a spear, it does 2 additional half-damage hits in front of the full damage hit (1/3 damage increase). Self-damage is not lengthened and would still only deal 4 hits. Switching out to a non-spear weapon after setting the bleed would still allow it to be lengthened. Turning a combo ability into a bleed ability via Greater Barge will not interact with spears' effect.

For claws, the damage over time is deal in 4 hits in autoattack damage (transparent hitsplats). If multiple crits occur in a short time, the DoT hits at the same time would be compiled into one hit.

Two-handed sword's healing will persist throughout Onslaught. If attacking an opponent that is meant to take no damage, it may still heal according to the crit damage you would have dealt.

While the sacred clay bow has the speed of a shortbow and the range of a shieldbow, it has the effect of neither (although it does not count as a shield in the first place).

Ancient Magicks do not count as air, water, earth, or fire spells for this purpose. The effects do not work in Daemonheim, despite still labelled to have them in the Dungeoneering spellbook.

The spell effect used is the one of the spell set to the main-hand, though the player may use a different auto attack spell to have its effect apply too. For example, the player may have the fire spells set to abilities, but 4taa with the air one, this means that you get the combust chance on every ability, but every auto attack gives you 1% armour (air effect).

With air spells, each hit gives a stack of the armour buff, so abilities like Asphyxiate and Chain can give multiple stacks if multiple hits are performed. The stacks are gained upon ability initiation, not when the projectile hits. Combust does not give that buff at all. If an attack misses or is meant to deal no damage (Storm Shards, or Shatter without Storm Shards stacks), the buff is not gained. Slayer Dart, Divine Storm, Storm of Armadyl, and Polypore Strike do count as air spells. Curse spells do not count despite being labelled as air spells.

With water spells, upon killing an enemy either with abilities or autoattacks with a water spell set to autocast, a pool of "Healing water" spawns, slightly later than drops. It has a "Walk-to" option that allows players to walk next to it. When adjacent or on top of it, the player is healed and the pool is consumed. It lasts for several seconds before disappearing (or when it is consumed). There is a cooldown on how often it can spawn, slightly longer than the duration, regardless of whether it is consumed. If multiple enemies are killed at once, only one pool would spawn. Healing water is consumed even if you are at full health. The killing blow must be an autoattack or ability with water spells, e.g. if the opponent was finished off by damage from Deflect Curses healing water will not spawn.

With fire spells, multi-hitting abilities have the chance to trigger the effect on secondary targets independently.

The staff effect only works with damaging ultimates (e.g. Omnipower). It does not affect Sunshine or Metamorphosis, and the accuracy boost is not given after casting said abilities.

Staff of Sliske's special attack, Shadow Clone, does not seem to apply any of the spell effects.

These effects are already present in the live game and will not be changed with the Weapon Diversity Beta.