From the RuneScape Wiki, the wiki for all things RuneScape
Jump to: navigation, search
The Old School RuneScape Wiki also has an article on: osrsw:Bank PIN
"Pin" redirects here. For the item used in Crafting, see Needle.

A Bank PIN (short form for personal identification number) is a security feature that players can use to protect their banks. It was introduced in the Bank PIN update on 19 September 2005.[1] A small update on 15 February 2011 removed the delay when randomizing the numbers after each entry, which made entering your PIN slightly faster. After 6 hours your Bank Pin will reactivate, even if you don't log out.[2]

Trying to find out someone's bank PIN goes against Rule 3 - Password Scamming (see Rules of RuneScape). It is also good to note that an unsuccessful attempt in gaining one's bank PIN is also against the rules and that one can get reported for doing such act. 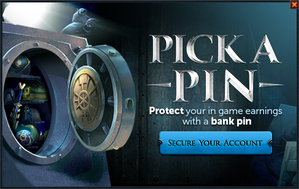 A popup reminding players to get a bank PIN 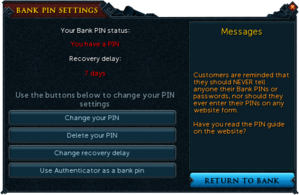 To get a bank PIN, players may click on the "Set a Bank PIN" button at the bottom of the Bank interface. Alternatively, players may choose to talk to a banker and say that they would like to check their PIN settings. Once they have done this, they may then set a 4-digit PIN. The Bank PIN may be cancelled before it is put to use.

Their bank will then have a bank PIN in either 3 or 7 days, at the player's discretion. The reason for a 3 (or 7) day delay is that if a person hacks the player's account before the PIN is set, the player can cancel the PIN the next time he/she logs back on.

If you have set up an external RuneScape Authenticator app for your game account, you will also have the option to use that as the PIN. The app will send a 6 digit authentication code that is always changing and would require that you have your phone with you. You still need to remember your 4 digit pin as the authenticator does not work on some occasions such as...

To remove a bank pin, simply talk to the Banker, click "I'd like to check my PIN settings", and then press "Delete Pin". 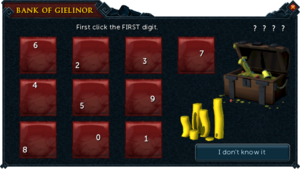 When a player has a bank PIN, they must then click on the 4 numbers they set it to. Once they have done this, they will have access to their bank account. The bank stays unlocked until the player logs out or loses their connection. The numbers on the keypad shift around after being clicked on, and the numbers move around within their red boxes. This is to prevent screen-capture spyware from compromising the player's PIN.

Bank PINs are a form of damage control against account thieves. Accounts can be stolen if an attacker obtains the login name and the associated password. If a computer is infected with a key-logger, it is possible for a thief to learn the login name and password combinations. Even without such malware infections, weak passwords might be guessed.

If an account thief is armed with only a username and the password, they will not be able to access the items stored away in the account's bank. Additionally, a keylogger cannot easily obtain the PIN, because players have to click on the numbers instead of typing them.

Bank PINs are the best things players can have to protect their bank account and it is strongly recommended to have one. In addition, players are well advised to only access their account from a trusted and non-infected computer. A non-obvious password and periodic password changes also help to prevent access to accounts.

As the Bank PIN only protects items that are in the bank, there is no protection for items that a player wears or have in the inventory unless you activate the bank pin setting on miscellaneous settings about using bank pin for dropping high valued items and accessing high risk areas such as wilderness. Banking all valuables prior to logging off places them behind the protection of the Bank PIN.

Bank PINs cannot protect against more advanced hacking software. Programs that take a screen shot every time the user clicks the mouse will obtain a screen where only the PIN key is made blank. The surrounding keys still show their number, so the PIN key can be deduced from the captured screen. Hence, bank PINs cannot always prevent hacking, although they provide a decent additional layer of security.

Some of these things are told in the Stronghold of Security, while others are just helpful to know. Here are some PINs that players should avoid using: