From the RuneScape Wiki, the wiki for all things RuneScape
< Bank
Jump to navigation Jump to search 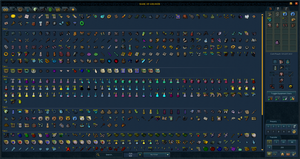 The bank after the rework.

The bank rework is an update first mentioned at RuneFest 2016.[1] It aims to improve several aspects of the bank such as adding placeholders, improving the search engine, and being more user friendly. The rework was delayed in 2018. A beta began on 31 July 2019. The rework went live on 30 September 2019.

The bank rework was first mentioned during the RuneScape Reveals panel at RuneFest 2016.[2]

On 9 December 2016, Jagex shared a design document[3] that outlined the changes that they had planned for the bank interface. The document outlined changes including adding new critical features, improving the usability of the bank, bringing the existing storage/retrieval features into one place, and improving the internal workings of the bank to make it easier to maintain and update.

On 17 February 2018, Mod Hunter released a bank rework taster which updated some bank scripts to allow some features of the rework to be added early, including rebindable preset buttons, faster loading of the manage presets window, access to Diango and player-owned house storage from the bank, and a new "clean-up" mode.

On 16 May 2019, a dev blog was published confirming that the update is still coming and that a beta will take place at some point in Q3 2019.[8] On 4 June and 2 July, Mod Shauny showed off the bank rework during official livestreams.[9]

On 31 July 2019, a beta for the bank rework began, accessible to all players. The beta included the introduction of bank placeholders.[10]