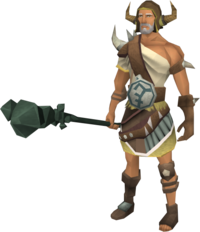 The Bandosian wild mage is a follower of Bandos encountered during Wilderness Warbands. They primarily attack their targets with magic, using the spell Fire Surge and various abilities. They wield staves but their standard attacks are as fast as they would be with a wand. In addition, they frequently use potent threshold abilities such as Asphyxiate and Wild Magic, and even ultimates such as Omnipower. For this reason they are considered among the deadliest of the monsters at the Bandos camp, behind only their leader, the Bandosian warlord.

Bandosian wild mages are also encountered while doing Treasure Trails. This version is level 119 and may appear at the end of scan or compass clues. It attacks with Earth Surge and the same abilities as the level 84 version, and has no weakness.