From the RuneScape Wiki, the wiki for all things RuneScape
(Redirected from Bandos' Tower)
Jump to: navigation, search 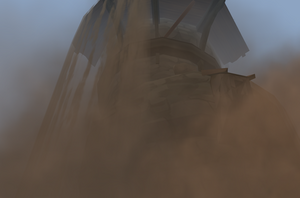 Bandos's Tower was the base tower used by Bandos and his army during the The Bird and the Beast world event. It was located next to the Goblin Village in the kingdom of Asgarnia. The tower was destroyed when Armadyl fired the Divine Focus at Bandos, killing him.

Not much of the tower remains today, with a large crater residing on its site, with a hole similar to a divination spot residing in the centre. Ruins of the tower and the Scarecrow can be found strewn around it. Goutbones the goblin can be found just outside, who will happily speak about the world event and allow you to re-watch the cutscenes. Bandos's destroyed head can be found just south of the tower, which can be prayed at to restore prayer points.

The following items could also be found:

Crush, the golem master and a partially built golem could be found on the 1st floor[UK]2nd floor[US]. Crush would happily tell you all about golems and how to build them. A completed golem could occasionally be seen here as well while it was not protecting or attacking caravans. A Bandosian follower could be seen watching over the caged prisoner.

This information has been compiled as part of the update history project. Some updates may not be included - see here for how to help out!
Retrieved from ‘https://runescape.wiki/w/Bandos%27s_Tower?oldid=35336179’
Categories:
Hidden categories: