From the RuneScape Wiki, the wiki for all things RuneScape
Jump to navigation Jump to search
The Old School RuneScape Wiki also has an article on: osrsw:Bandit champion

Ali the bandit champion is a Pollnivnian bandit henchman fought during The Feud quest. He will appear after the player speaks to the leader of the Pollnivnian bandits. When he is killed, he drops bones and a willow blackjack, or if you already have a willow blackjack in your inventory, a small bladed adamant salvage. The bandit champion appears at the northern end of Pollnivneach. 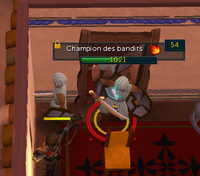 He can be safespotted by going behind the table in a house near his spawn, he will get stuck behind the chair.

This information has been compiled as part of the update history project. Some updates may not be included - see here for how to help out!
Retrieved from ‘https://runescape.wiki/w/Bandit_champion?oldid=35651011’
Categories:
Hidden categories: