From the RuneScape Wiki, the wiki for all things RuneScape
Jump to navigation Jump to search
The Old School RuneScape Wiki also has an article on: osrsw:Balloon transport system 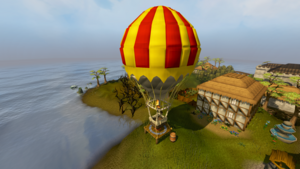 The balloon transport system or Hot Air Balloon is one of many transportation methods in RuneScape. During the Enlightened Journey quest it can be used for travel between two locations. After the quest is complete, four more locations are available to be unlocked by completing respective journeys to those locations. The music track Floating Free plays during the journey.

Having unlocked all travel routes is one of the requirements for getting a trimmed completionist cape and master quest cape. 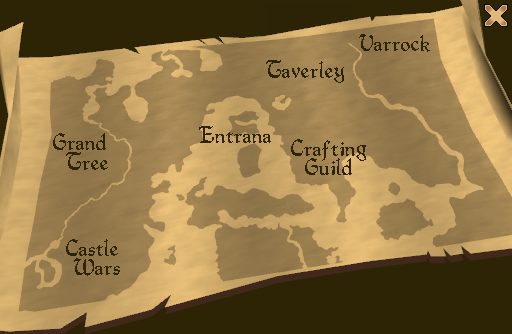 There are currently 6 locations that can be flown to, each needing a specific type of log and Firemaking level to attempt the flight.

After completing the Enlightened Journey quest, a player can travel between Entrana and Taverley. In order to travel using the balloon system, a player must give logs (noted or unnoted) to the balloon assistants by each balloon to earn charges.

To unlock the 4 new routes, a player must first start from Entrana with the required charges, and navigate successfully through 3 screens to a new destination. Crashing the balloon will result in the loss of the remaining charges, and the need to start again in Entrana and paying the full cost of the initial trip's charges. Once a destination is unlocked, players may travel there from any other unlocked location, using fewer charges, and without navigating the 3 screens. Players can use the "Store logs" option on Auguste to gain charges.

For each of the 4 new routes that is unlocked, a player receives 2,000 Firemaking experience. Going back to Entrana to unlock the other destinations requires 1 charge.

The hot air balloons use a charge system to travel. Higher tier logs count for more charges and up to 4000 charges can be stored by giving logs (noted or unnoted) to the balloon assistants located next to each balloon, by right-clicking on the assistant and selecting 'Store logs'. Note: At time of release, logs cannot be withdrawn.

The following logs can be used to gain additional charges. Acadia, Maple logs and Protean logs may not be used. 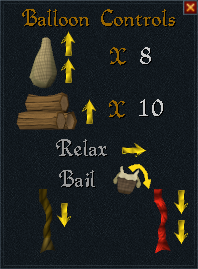 See the quest Flying to Taverley section for a review of flying a balloon.

There are 6 locations the balloons can fly to: Entrana, Taverley, Crafting Guild, Varrock, Castle Wars, and the Grand Tree. Entrana and Taverley are available after completing the Enlightened Journey quest.

A player crashes the balloon

Entrana is also the main entry point to unlock routes to new locations. A player must start at the Entrana site and spend the required number of charges for the first trip.

For the first trip, a player needs to navigate through 3 screens avoiding birds, clouds, buildings, trees, and other hazards. Once the player completes the journey, subsequent trips do not require navigation and requires a significantly lower number of charges (between 1 and 5, depending on the destination).

If you log out during one of these screens, you will have to start over using new charges.

No future destinations have been confirmed, but there are several rocks that look exactly like the balloon landing sites before completing Enlightened Journey. In the Rellekka Hunter area there is a snow- or ice-covered stone landing pad rock in the northeast.

The following sections show one of several possible methods to get to the final destination.

Uses and costs of the balloon transport system[edit | edit source]

The main uses of the balloon transport system are in combination with the use of a ring of duelling teleport to the Castle Wars for banking. Typical trips start at the Castle Wars bank, which has an entry to the balloon transport system close by. A trip can also start at Grand Tree if a player teleports themself there by using a spirit tree (the balloon is just north-east). For simply accessing the network without round-trip travel, the Crafting Guild option of the skills necklace is fastest, but the bank is further away.

Examples of round trips to balloon transport system destinations, and possible activities are presented in the table below:

As one example, a player with 60 Woodcutting can equip an earth tiara, and rune essence at Castle Wars:

Repeat as needed for a much faster way to get both oak planks for Construction and runecrafting experience, using less time and run energy than other plank or runecrafting options. Alternatively players may use a ring of duelling rather than the balloon to return to Castle Wars.

This information has been compiled as part of the update history project. Some updates may not be included - see here for how to help out!
Retrieved from ‘https://runescape.wiki/w/Balloon_transport_system?oldid=35959371’
Categories:
Hidden categories: