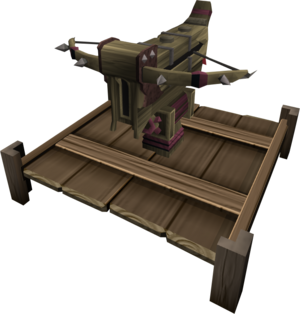 The ballista set up

The Ballista is an obtainable reward from Castle Wars costing 8 silver tickets and is only usable in the game itself. There are four parts that form a ballista: they are the Ballista base, Ballista bow, Ballista bolt stack, and Ballista chamber. Each of these parts costs 2 silver Castle Wars tickets, and each Ballista ammo costs 4 tickets and yields 100 bolts. Bolts cannot be sold back to the shop

Before you can use a ballista in a Castle Wars match, you must purchase all four ballista parts and at least one piece of ammo for it. If you lack ammo, it'll display the message: "You don't have any ballista ammo, so there's no point in setting up the weapon.". After the ballista is destroyed, the parts (including all left over ammo) are dropped on the left side of the setup station for the owner to pick up. You will get a warning 2–3 minutes in advance if it is going to collapse out of time. Therefore, once the ballista parts are dropped, the player may use it again in exactly 1 minute's time. Then they may be set up and used again. This is an effective way to get the most kills as it usually hits a minimum of 100 life points. It can also be rotated at right angles.