Back to the Freezer

Back to the Freezer is the fourth quest in the Penguin quest series.

The penguins are back for another slippery tale of subterfuge and ramshackle science that'll leave you questioning the very fabric of reality…as well as the good taste of its puns.

Rewards include hearty chunks of XP to ward off the polar chill, as well as improvements to the XP rewards from Penguin Hide & Seek and the Circus.

And with that, you're on your own. Can you circumvent the latest flashpoint in Gielinor's coldest war? There's only one way to find out.. 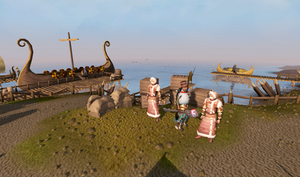 To start the quest, speak to Chuck in his enclosure at the south side of the Ardougne Zoo. He asks you to meet with two PBJ agents, Skot and Mundsen, who have reported increased penguin activity on the Iceberg. He provides you with a passphrase consisting of three parts: "The weather on the holiday location is weather option and the fish option are to die for." The phrase varies by player and will be noted in your quest journal.

Travel to Rellekka and talk to Skot and Mundsen, who are north of the marketplace. After you provide the correct passphrase, Skot and Mundsen tell you that Pescaling Pax is plotting to permanently lower the temperature of Gielinor.

A short cutscene takes place on the iceberg, where the penguins launch a flying telephone booth. When they land in the desert, the landscape becomes covered in snow before the cutscene ends. 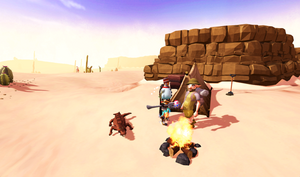 Talking to Croc and Dundee near the crash site

Skot and Mundsen asks you to travel to the crash site south-west of Pollnivneach to investigate, stating that they are too "busy" to do so themselves. You can get there by breaking a Pollnivneach tablet, taking a magic carpet from the Shantay Pass to South Pollnivneach, using the Bandit Camp Lodestone and running east or teleporting to Sumona with a ring of slaying or slayer cape.

Speak with Dundee just north-east of the T.A.R.D.I.S. and ask him about the penguins. He didn't see anything, but he provides you with a crocspeak amulet which allows you to speak with the crocodile near Dundee's camp.

Equip the amulet and speak with Croc, who asks you to help with the temperature in the area, stating that he doesn't like the cold. After talking with Croc, you discover Croc used to be an inhabitant of the Ardougne Zoo and is familiar with Chuck, though he didn't believe his penguin stories until now.

Investigate the T.A.R.D.I.S. to the south-west of Dundee's camp. You find a sign that reads "Terraforming Arctic Refrigeration Dispersing Ice Spreader" before deciding you should tell Chuck what they have found. 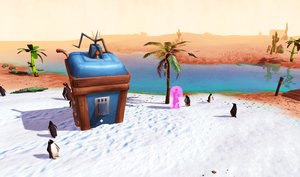 Getting into the clockwork suit

Bring Chuck up to speed with your findings. He suggests you find the PBJ agent that has infiltrated the "extreme penguin cell"; the problem is the agent's identity is so secret that even Chuck doesn't know his name. However, he does provide a clue: "The only thing I do know about him, is that his favourite food is sardines." If you don't have a clockwork suit with you, Chuck will give you one.

Travel back to the T.A.R.D.I.S. and upon speaking with a named penguin, your clockwork penguin suit is automatically put on (your cape, main hand and off-hand slots must all be empty. Also, if you have a wing customization active that will prevent the suit from being put on). Speak with Emperor Wing, Gordon, Hugh, and Elon to gather clues towards figuring out who the agent is. After talking to all four penguins, a new option appears to ask if the penguin is a spy.

(Note: deriving the solution yourself requires you to right-click and examine the penguins, or look at the examine-text on their pages.)

Speak to the secret agent, Gordon, and ask him if he is a spy. He tells you his plan to sabotage the penguins, and directs you towards his locker in a secret bunker on the Iceberg. 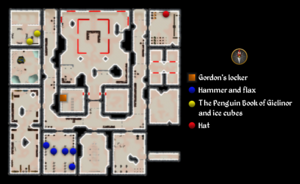 A map of the secret bunker in the present

If you log out of the game while in the secret bunker, your character will appear just outside of the entrance manhole when you log back in. All of the items collected in the bunker will remain in your inventory.

Travel to the iceberg via the small boat north of the Fremennik lodestone and use the G.P.S. you received from Gordon to locate the secret bunker. After some interference, you discover a mysterious hatch leading to the secret bunker. Change into your disguise by talking with Jim to the east. Return to the hatch, type the CHIP and FIN code (1234), and enter the bunker.

Follow the hallway south and then west to the centre, and enter the doors to the main research facility. Enter the locker room directly west, and search Gordon's locker to find the de-lore-ing device parts list and the incomplete device. Search the following areas to find the items needed to complete the device:

Warning: if you are playing the game in a different language, the items found might differ, but they are found at the same locations and you can combine them the same way. Read the de-lore-ing device parts list to check which ones are missing.

Use the items on each other to create a flax cap-ice-i-tor, and then use this "capacitor" on the incomplete de-lore-ing device to complete it. 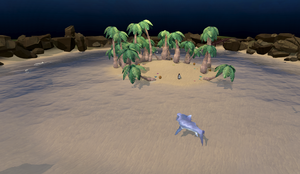 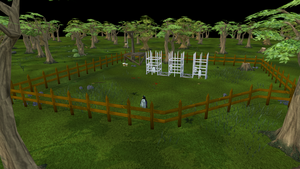 An even odder place 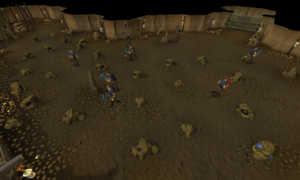 Malfunctioning again, the device teleports you to a fenced-in area in "Fin-inor" where Ping and Pong are caged. Grab the penguin bongos and cowbells and use them on the device to "fin-tune" it.
"Something happens with the De-lore-ing device as you hit the bongos. It probably could've done with some fin-tuning but that'll do."

Operating the device again teleports you to a cabbage field with the Gower brothers. The device has now stopped working entirely, but picking a cabbage and using it on the device will prime it and will once again be operable.
"You rub the cabbage on the De-lore-ing device. That seems to have primed it ready for use."

You now arrive at the Mining Guild with men mining coal and mithril rocks. The device is now crashed and requires something to get it restarted. The men with rune pickaxes are bots, so talk to the man with a dragon pickaxe. The man suggests to "give it a kick" and gives you a pair of worthless old boots. Use the boots on the device to "re-boot" it, and it is now functional and finally transports you to the secret bunker in the past upon being operated one last time.
"You use the boot to give the De-lore-ing device a kick. Oh look, the device is re-booting now."

The past secret bunker[edit | edit source]

Again, if the player logs out of the game while in the bunker, upon logging-in, the player's progress will be saved and your character will appear outside of the bunker in front of the Mysterious Hatch. 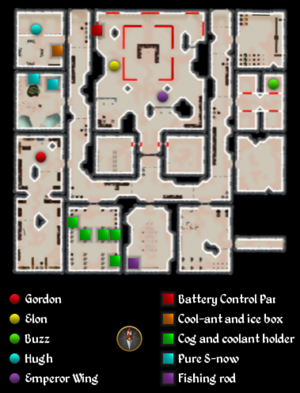 A map of the secret bunker in the past

Talk to Gordon in the laboratory to the south-west, who refers you to Elon in the central room (with the T.A.R.D.I.S.). Speak to Elon and he asks you to collect items from around the base. Search the following areas to complete Elon's list:

Items needed: 50 of each: bright, flickering, gleaming, and sparkling energy

After you bring Elon the required items, he asks you to find a way to charge the T.A.R.D.I.S. Use 50 of each Bright, Flickering, Gleaming and Sparkling energy on the energy container to the north-west corner of the room, then charge the batteries by solving the puzzle at the Battery Control Station. 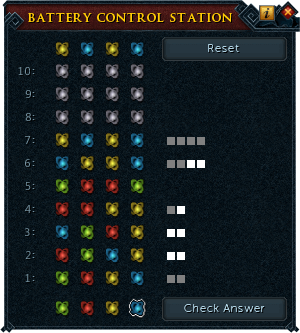 An example of the randomly-generated Battery Control Station puzzle.

The puzzle works the same way as the board game Mastermind, in which you must figure out the order of the pegs (in this case the pegs are the energy types). Select which energy types you would like to place in each of the 4 slots, and try to solve. To the right of your selection, you'll be given either nothing, a number of grey squares, a number of white squares, or any combination of these.

By trying different combinations and observing the outcome of the grey/white squares, you must figure out which colour pegs belong in which spots, thus solving the puzzle. Each row is a separate guess at the four-energy sequence (Meaning there are 10 guesses per attempt). Resetting the puzzle will change the correct sequence.

By setting each of the slots to the same colour, the number of grey squares shows how many of that colour is in the solution. Doing this for three colours gives the number of each colour needed. The number of the fourth colour pegs is the remaining number of pegs not identified by the first three. This can use up to three turns, but then only determining the order remains.

A tip to make the puzzle easier is to reset and test each colour until the solution only has 2 colours in it. Then there are a lot fewer combinations that you need to test.

The puzzle is complete once four grey squares appear in the right column next to your guess (see the example image). Click the 'X' in the upper right corner of the Battery Control Station interface to close the puzzle.

Return to the present[edit | edit source]

After solving the puzzle, the T.A.R.D.I.S. is completed. Talk to Elon (current room), Gordon (laboratory to the south-west) and Hugh (chill-out room to the north-west) and then go back to the main research facility to inform Emperor Wing. Shortly afterwards, the cool-ant starts to leak around the facility. You may now pilot the T.A.R.D.I.S. and escape.

Following a cutscene, the T.A.R.D.I.S. crashes in the desert because of the player's lack of knowledge on how to pilot it: the very fact that you went back in time to prevent the crash caused it to happen, closing the time loop and starting another cycle. Return to Chuck in the Ardougne Zoo to report the case. You express concern that despite Gordon sabotaging the machine in the past, the T.A.R.D.I.S. has landed and could cause the desert to freeze.

Chuck informs you, however, that the T.A.R.D.I.S. machine had already been sabotaged and was harmless when it landed, and so its cooling power is under control. Begrudgingly, you accept the outcome and Chuck rewards you. 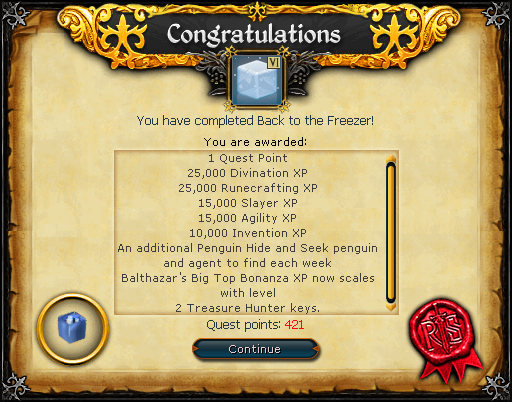 Back to the Freezer is not currently required for any quests or miniquests.

The head banner for the quest 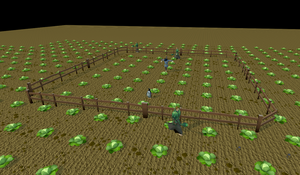 The Gowers and one million cabbages