From the RuneScape Wiki, the wiki for all things RuneScape
(Redirected from Baby troll)
Jump to navigation Jump to search
This article is about the pet. For the baby troll from player-owned farm, see Baby Shakes.
Loading...
PetWild

The baby troll is a pet obtained by speaking to Corporal Keymans in the Imperial Guard camp to the east of Burthorpe Castle. Like all trolls, it gets its name from the first thing it eats, which is whatever the player uses on it.

To get rid of the baby troll, drop it on the ground and dismiss it from the Follower Details panel. If the baby troll is dismissed or lost in some other way, players can receive another by talking to a pet store owner and asking if they have found any strays or by asking Corporal Keymans about it. If lost, the baby troll's name will not reset, and it will still have the name it was given when it is reclaimed.

Using an item on it causes the baby troll to say, "YUM! Me Like (item's name)!" If a name has not already been given or if its name is reset, it will become that of the item, and the item will disappear. The baby troll's name can be reset by talking to it and choosing the second option. If an item cannot be fed to it, the baby troll will exclaim, "(baby troll's name) no like that!" If a player attempts to feed a borrowed item to a baby troll, they will get a message saying: You can't feed your baby troll someone else's item!

Items fed to the baby troll are lost and cannot be re-obtained; please proceed with caution when feeding it.

In the past, players with a lot of wealth could reset the baby troll's name and feed it an expensive item, so its left-click option became "Pick-up (expensive item)". Unsuspecting players who clicked on the pet, hoping to loot said expensive item from the ground, were thus 'trolled', hence the significance of the creature: a baby troll. Also, anyone could also feed it one coin, and its name would be changed to coins. This was also another way to 'troll' another player. However, the pick-up option no longer appears to players other than the owner. Some players may also feed their trolls discontinued rare items (e.g. pumpkin) that cannot be worn in order to show off their wealth.

Untradeable items that can be eaten[edit | edit source]

As almost all untradeable items cannot be fed to the baby troll, a list of such items is not kept. Below is a list of exceptions.

These items can be fed to a baby troll to give them a name that is different than the name of the item.

Although almost all tradeable items can be eaten, there are exceptions. 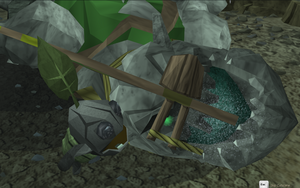 The baby troll and his father, Morningstar

The baby troll was originally part of the Troll Warzone tutorial and first appeared in a cutscene where it crawled out from behind some rocks after the player defeated Morningstar. Imperial Guard soldiers chased it into a cannon, where the player had the option to either take it out and adopt it or fire the cannon. If shot out of the cannon, the player could later talk to Corporal Keymans to adopt it, as it fell into some manure.

In an earlier version of the tutorial, it was instead found in the Abandoned Burthorpe mine, where Morningstar was originally fought, and appeared after his death. In this version, Ozan became attached to it. It also had different voice-acting during this time.