From the RuneScape Wiki, the wiki for all things RuneScape
Jump to: navigation, search
The Old School RuneScape Wiki also has an article on: osrsw:Baby black dragon
This article is about the monster. For the Summoning pet, see Baby dragon (pet). 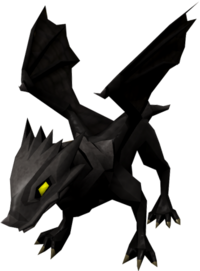 Baby black dragons are the offspring of adult black dragons and are the strongest baby dragons in the game. Unlike their adult form, they are too young to breathe flames, so an anti-dragon shield or other protection from dragonbreath is not needed to fight them. However, players may still need to bring protection, as they are found in locations that also contain adult dragons.

One baby black dragon can be found inside the Evil Chicken's Lair; it is reachable by using a rope on a hole towards the back of the cave (the rope will disappear after a few minutes). Several may also be found with the green dragons in the Chaos Tunnels.

Baby black dragons have comparable combat stats to those of an adult green dragon.

Due to being much weaker than their adult counterpart, black dragons, they are a much easier method for completing black dragon Slayer tasks. The trade-off is that they give far less Slayer experience and don't have any valuable drops.

An easy method for this is to take Guthan's, regular melee armour, an anti-dragon shield, raw chicken and a rope to the Evil Chicken's Lair (only one resides here). Equip the anti-dragon shield and use the raw chicken on the statue to gain entrance to the lair. Run to the hole that leads to the Baby Black Dragon and use the rope on it. Switch to your normal shield slot item and continue to kill them until your health is about half-full. Switch to Guthan's and use it until you're fully healed then switch back to your normal equipment. With this method, you could kill them for an extremely long time.