From the RuneScape Wiki, the wiki for all things RuneScape
(Redirected from Azacorax)
Jump to: navigation, search
"Timmy" redirects here. For the goebie villager, see Goebie.
Loading...
NormalA Towering Feast

Azacorax, Keeper of the Key to the Abyss, named Timmy by the wizards of the Wizards' tower, is the Wizards' Tower's pet lesser demon, kept by Melville Grayzag and Wizard Taloram (or Wizard Whitezag during A Towering Feast). He was summoned many years ago and caused damage to the earlier Wizards' Tower. The tower wizards kept destroying him, but he would respawn on the same spot each time they did so. As such, a protective barrier was placed around that spot, making the demon unable to escape.

Throughout the years, different wizards have been assigned to guard the demon. Wizard Grayzag treated him like a pet, while his successor Taloram is more prohibitive when it comes to having contact with the demon. Despite his fearsome appearance and aggressiveness, he can be a sweet pet according to Grayzag. He particularly enjoys his teddy bear. 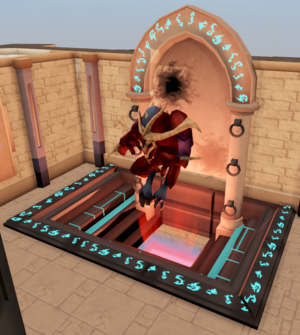 The demon trapped in its barrier

During Rune Memories, it is revealed that the lesser demon played a role in the creation of teleportation magic. The problem with teleportation was that the wizards could not figure out how to evade obstacles, until Kelavan the Red accidentally discovered that a second plane could be used for teleportation. Using this idea, Zanmaron the Red made a deal with a lesser demon from the abyss, called the Keeper of the Key of the Abyss, so that the abyssal plane could be used for teleportation. A ritual commenced, with the demon hiding behind Zanmaron. The ritual was successful and opened a permanent connection between Gielinor's plane and the abyssal plane, however, the Wizards' Tower was destroyed in the process. The demon survived and has since then been a pet of the new Wizards' Tower.

If you talk to the lesser demon after doing Rune Memories with 50 Prayer and 50 Magic you can get 10,000 Magic or Prayer experience depending on if you decide to give him a drop of your blood or refuse, the same deal that he gave Ariane.

In Imp Catcher, Grayzag ordered imps to bring Mizgogs beads to various runic altars and then return them, but when they brought them to the altars the beads were charged with energy, and the imps felt compelled to eat them. The imps later reveal that Azacorax has actually been manipulating Grayzag and that the beads play a role in a mysterious plan of his. They characterise Azacorax as a demon far worse than themselves and look down on Grayzag for dealing with him. They also reveal that it was Azacorax who taught Grayzag how to summon imps in the first place. 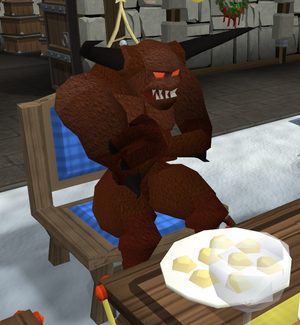 Timmy sitting at the banquet

In the event, you are trying to help Kris and Kringle make a pudding and one of the ingredients needed is lesser demon claws. Those then are obtained from Timmy in the event. Talk to him once to obtain the first set of Lesser demon claw. Talk to him again. An anger meter appears at the top of the screen. In order to fill the meter, you could:

If you annoy him with the same action repeatedly, he would start ignoring you. Switch to another action when this happens. When his anger meter fills fully he will be so mad, you will be able to obtain the second set of claws. Sometimes the anger meter would appear to be fully filled but you don't get the claws. Simply do another option to actually complete the process. Logging out would reset your process in angering him.