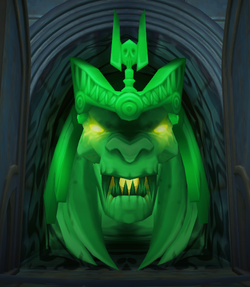 The Avatar of Amascut was a community boss featured in the 2015 Hallowe'en event. It was controlled by Amascut in an attempt to break open the doors to the afterlife in the Grim Underworld.

The avatar appeared every 15 minutes, signalled by " The gates to the Underworld have been opened, Amascut's Avatar must be defeated!" in the chatbox, and a shaking of the screen.

All four braziers had to be lit in order to cause damage to the Avatar of Amascut.

The Avatar's spawn-time was exactly 15 minutes after the head moved backwards behind the door and disappeared, not when it hit 0 life points. This made the spawn-time world dependent, as one world may have had a different kill-time than another.

When the Avatar of Amascut was defeated the following rewards were received: