Avalani is a mage responsible for creating a safe passage to the Clan Citadels. She can be found in the Clan Camp, as well as in all Citadels. She is notable for causing the chicken appearances all over Gielinor, due to them being used as test subjects for her unfinished portal. She also played a central role and was the starting point of the Cryptic Clue Fest III. In the Citadel, she gives information about clans, handing out the Citadel handbooks. Speaking to her in the Citadel unlocks the achievement "A Wizard Did It". 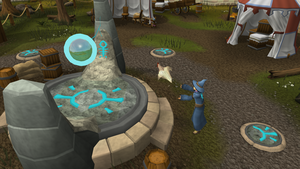