Avach nimporto is a spell used by Tool leprechauns to transport players to the Vinesweeper minigame. Currently, there is no other way to get to Vinesweeper, but any leprechaun near a farming spot can use the teleport. While casting, the leprechaun performs a modified version of the "Dance" emote, creating rings similar to the Curse spell before teleporting you. 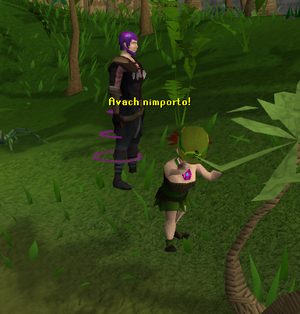 This spell is useful in various ways. Besides making Vinesweeper fairly easy to access compared to other minigames, it is effective for creating a meeting and trading place, as players scattered across Gielinor can get there from any Tool leprechaun. As a more practical use, you can also buy a spade from Mrs. Winkin for 5 coins if you forgot yours in the bank.

Unfortunately, the fact that the teleport option is on the same right-click window as Exchange is occasionally a minor hindrance to farmers attempting to access their tool store. If they are not careful, they may end up on Winkin's Farm instead of in possession of the needed implement. However, simply exiting through the portal will return you to the Tool leprechaun that casted the spell.

The mechanisms of the spell are unknown, but it appears to be a tele-other spell in a spellbook other than the three available to players. It isn't species-exclusive; elves who perform tool leprechaun functions, such as Teclyn, also know the teleport spell and are able to perform it on players. Looking at the wide variety of clothing between the leprechauns, that doesn't seem to be a probable cause. More than likely, the ability to cast the spell comes from the same magic that allows them to store large amounts of farming equipment.