From the RuneScape Wiki, the wiki for all things RuneScape
Jump to: navigation, search
Auspicious Katana? (edit)

An auspicious katana is a weapon originally obtained as a very rare Treasure Hunter prize. It requires Attack level 75 to wield. Its stats are identical to those of a godsword, but the auspicious katana has no passive effect or prayer bonus and weighs less (3.6 kg versus a godswords' 10 kg). It has since been acquirable from the use of rare item tokens, Vic's Store, the Blast from the Past Treasure Hunter promotion, and the Parcels from the Hedge event.

This katana, the ornate katana, the golden katana, the Eastern outfit, the quick-fire crossbow, and the Wushanko outfit were the only known items to have come from the Eastern Lands until the release of player-owned ports.

It has the same value as the Saradomin godsword. If it is lost or destroyed, it will cost 250,000 coins to retrieve from Diango or Ianto. 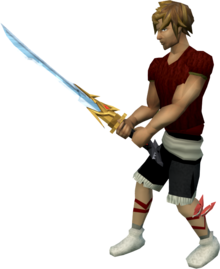