From the RuneScape Wiki, the wiki for all things RuneScape
(Redirected from Aura management)
Jump to navigation Jump to search 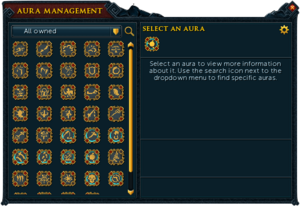 A place for your auras

The Aura Management interface houses all player-owned auras. From there, they can be activated or extended. It can be accessed from anywhere (save for a few exceptions, such as within Daemonheim) under the Worn Equipment interface. Auras can also be favourited, which will allow the player to quickly activate them by right-clicking the Aura Management button.

The interface can also be used to buy new auras under the unowned category. It will only show the auras that are available for the player to buy.

The desert pantheon aura is the only aura still located outside of the interface as a regular item. 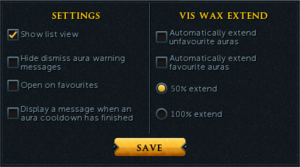 Within the settings menu, the player can toggle three options relevant to the interface or auras in general.

Switches the aura interface from a grid based view, showing only the names of auras.

Disables confirmation message when deactivating an aura before it runs out by itself.

When toggled, opening Aura Management will open the "Favourites" category instead of "All owned".

Players can favourite auras by clicking the small star icon.

When an aura is favourited it will show up in the "Favourites" category. They are also quickly activatable by right clicking the Aura Management button.

This information has been compiled as part of the update history project. Some updates may not be included - see here for how to help out!
Retrieved from ‘https://runescape.wiki/w/Aura_Management?oldid=35992349’
Categories:
Hidden category: