From the RuneScape Wiki, the wiki for all things RuneScape
Jump to: navigation, search
Aten (Heru's shield)? (edit)

Aten is a shield that Heru wields during the quest Diamond in the Rough. It can be obtained by slicing open dung kalphites after finishing the quest. Only one can be obtained. If a player receives one from dung kalphites but does not pick it up, another may appear. However, if a player tries to pick up the second one, it will disappear, resulting in the message You already have one of these; this one must have been a mirage.

Since 5 June 2017, Aten can also be worn as a cosmetic override which is unlocked when picking up Aten. 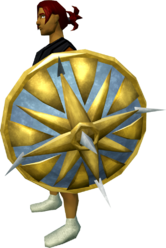