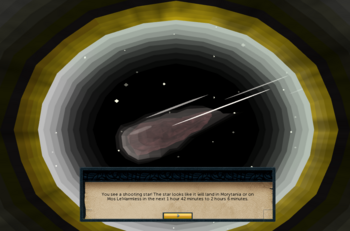 Astronomy is the study of stars, planets, and other celestial bodies and their significance.

The modern study of astronomy in Gielinor is mostly accredited to Scorpius, who started studying the stars during Fourth Age. He built himself a telescope and started to use the stars for divination, naming the constellations as he researched. 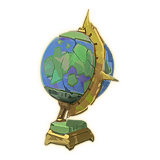 An ancient globe of Gielinor dating back to the Zarosian Empire.

Astronomy existed as a field of science before Scorpius. There is evidence that astronomy was studied in the Zarosian Empire during the Second Age. The Mahjarrat Wahisietel suggested that the Ritual of Rejuvenation was to be based on an alignment of certain celestial bodies - syzygy - a phenomenon happening once approximately every 500 years to make it easier to identify the time for the ritual, basing the idea on human astronomers' talk. But like most of the knowledge and scientific prowess of the Zarosian Empire, most of the knowledge of astronomy was likely lost in the Zarosian Extermination. 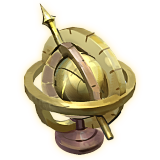 An Armadylean spherical astrolabe, presumed to be a map of the heavens.

Recent discoveries indicate both ancient Saradominists and Armadyleans of the Second and Third Age also studied astronomy and used it to keep track of time and cosmic occurences.

The Age of Scorpius[edit | edit source]

An ancient coin from the Infernal Source, carrying the symbol of the star sign Scorpio.

Scorpius was a scholar that lived during the Fourth Age and is considered the father of modern astronomy. Scorpius sought communion with the gods to answer the many mysteries of the world. He invented a telescope that allowed him to observe the stars and planets. He named the stars and constellations visible from Gielinor and the names are still used to this day. But Scorpius' Zamorakian devotion and support angered the king of Ardougne, who had his work destroyed and Scorpius exiled.

Scorpius continued his studying in the hills west of Ardougne supposedly till his death. His grave was constructed in his memory just north of the Observatory, and it is still to this day Spirit of Scorpius.

The uncovering of the Infernal Source suggests that Scorpius did not invent the names, but either rediscovered the lost names of the constellations or based them on the Zodiac star signs, which have been discovered in the Source, which predates Scorpius by thousands of years. Aries, Taurus, Gemini, Cancer, Leo, Virgo, Libra, Scorpio, Saggitarius, Capricorn, Aquarius and Pisces are all names of the star signs of the Zodiac.

There are a few places where astronomy can be practiced in Gielinor today. The biggest telescope is on the top floor of the Observatory, which must be repaired during the Observatory Quest before being used. Its design is based on that of Scorpius, and it is currently run by the Observatory professor and Observatory assistant. Through it, players can view some of the constellations in the sky. On the walls of the lower floor in the observatory are some charts which show the 12 standard astrological constellations. (i.e. Capricorn, Aquarius etc.) There is also an Orrery in the Observatory reception, which is where players can find the Astronomy book.

Several pieces of astronomical equipment can be built in the study of a player owned house including telescopes, globes, orreries and astronomical charts. Players can use the telescope to look for Shooting Stars during the Distraction and Diversion.

The art of astronomy is also a part of the navigation in RuneScape. Players can navigate by the sun using a Sextant, Chart and Watch. Coordinates are given in degrees and minutes, with the Observatory being the centre at 0 degrees north (equator) and zero degrees east (meridian). This is used in medium and hard Clue scrolls in Treasure Trails.

Not much is known of the local solar system, that Gielinor is part of. The large orrery, that can be built through the Construction skill, depicts the solar system consisting of two planets orbiting a star, it is unknown if there are more planets in orbit of the sun. The inner planet is depicted as light blue and orbited by two grey moons. This planet may be ScapeRune, a world said to be opposite to Gielinor. The outer planet in the orrery is depicted as bigger than the inner, light blue and its moon is grey, most likely Gielinor and its moon Zanaris.

Wikipedia also has an article on: wikipedia:Astronomy
Retrieved from ‘https://runescape.wiki/w/Astronomy?oldid=34675058’
Categories: