From the RuneScape Wiki, the wiki for all things RuneScape
(Redirected from Assist system)
Jump to navigation Jump to search

The Assist System allows players to temporarily use each others' skill levels. The Assist System is designed to be a replacement for temporarily giving an item to another player so that they can process it in some way, and then trusting them to give it back (as manually trading was quite often abused to scam players).

For example, a player might want to turn an uncut ruby into a cut ruby, but not have the level 34 Crafting required. Using the Assist System, players simply "borrow" someone else's skill levels and then cut it themselves, which means that the ruby never leaves their own inventory. The assister receives all skill experience, which is their payment for assisting.

Use of the Assist System is limited to the following 9 skills: 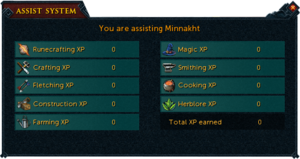 With the Assist System there is a right-click option for players, labelled "Req Assist". Assistance requests are similar to trade requests, in which the target player receives a message in the chat box which opens up a window when clicked.

The Assist icon will appear in the top right corner of the game window of the player being assisted. The assisting player is unable to move or do anything other than chat to friends or surrounding players while the window is open.

If someone requests assistance and you want to assist them, simply click on the text line where the request appears in the lower left box on the screen to start assisting.

Most of the non-combat skills are displayed in the window, along with the amount of experience the target player has gained through the Assist System in the past 24 hours. All of the skills are shared by default, though the assisting player can click on any skill to switch it off. The effects of a temporary boost will also pass to the assisted player.

Players can choose to restrict or block notification of assistance requests. To do this, they can right-click the "Assist" button below the message box to set it to "On" (receive requests from any player), "Friends" (receive requests only from players on their Friends List), or "Off" (block all requests). Along with changing who can assist them, when the button is right-clicked, there is an "XP Earned/Time" option. If clicked, a message is displayed as to how much XP a player has gained, along with how long until they can assist again (if 24 hour limit is reached).

If the player requesting assistance already has the requisite skill level to do something, they will gain experience rather than the target player, even if the target player has lent their level. 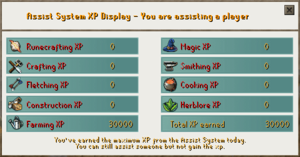 Once 30,000 experience has been gained, the interface changes.

The following restrictions apply to usage of the Assist System:

This feature was originally added in the Assist System update on 5 November 2007. On 12 November 2007, an Assist System and Skills Interface update was released. This removed Fishing, Hunter, Mining, and Woodcutting from the Assist System, because those skills are used to obtain raw materials. Players suggested on the forums that these skills could in fact be developed faster without the assistance system, and that players seeking resources could obtain these items from direct player to player trades just as easily. Those players of lower skill levels typically didn't know how to efficiently gather resources and typically wasted the time of the higher level players that could have been spent simply gathering these resources in the first place.

Many players had complained on the official forums and elsewhere (including a few minor riots) that the assist system ruined work ethics, but the complaints quickly died down after the change.

When the Knowledge Base Article on the main RuneScape page first came out, the picture showing "Req Assist" from the player had a right-click "Report Abuse" option (which is used by player moderators and Jagex staff). This picture has since been removed and replaced with a new one. An update on 25 October 2011 allowed all players to use the right-click "Report Abuse" feature.

On 10 June 2009, there was a glitch where players could not request assistance.

Jagex has made an update that allows players to see the current skill levels of the player providing assistance. This change was made to prevent scamming, especially at Runecrafting altars.

On 25 August 2010, Jagex added a right click option to check XP Earned/Time. This was to stop players asking for someone to request assistance to find out how long until the assisting player could assist again, the only previous way.