From the RuneScape Wiki, the wiki for all things RuneScape
Jump to navigation Jump to search
Not to be confused with A Shadow over Ashdale.

The Ashdale Tutorial is a former tutorial, located on the island of Ashdale, where new players could find themselves after they created their account. More experienced players could access it by speaking to Gudrik in Taverley, just south-west of the bank. They would be required to bank all of their items before they could access the tutorial.

On 14 May 2018, the tutorial was replaced with a revamped version of Tutorial Island. It was then completely removed with the 2 September 2019 September Mobile Update, with all accounts who were still located on Ashdale teleported to Burthorpe lodestone.

Birth of a hero[edit | edit source] 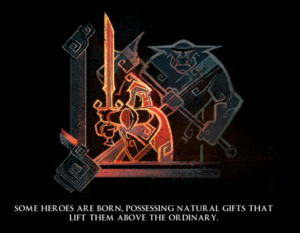 The introductory slideshow, narrated by Gudrik.

After a short introductory cutscene, narrated by Gudrik, you will arrive on the north-western side of the island, and Gudrik will greet you. He tells you of a dream he had, depicting a prophecy that depicted the world going down in flames, and that only you can stop it. He tells you that you will need to go to the mainland to do so, as you're special, and plans to prepare you for this by helping you collect food and create a new weapon, as your current sword is rusted and brittle.

Attack of the zombies[edit | edit source] 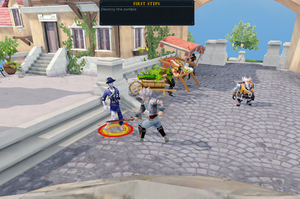 Follow Gudrik down into the marketplace, past the newly opened gate. You will hear a sound and halt, and a zombie will burst from the paving stones. It is very easy to defeat, and does not have any special abilities, and it is impossible for you to die. After you defeat it, you will gain the Slice ability in the first slot of your action bar, and another zombie will appear. Use this ability to defeat the second zombie, who like the first, is extremely weak. 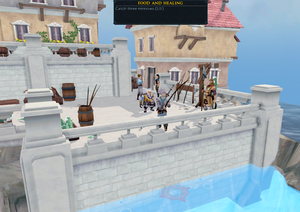 Fishing for some minnows.

Surprised by the zombies, Gudrik will lead you to a fishing area to the north, and gives you some bait to use. Catch three raw minnows at the indicated fishing spot, and Gudrik will congratulate you. You may talk to Hendrik the fisherman nearby when you're done to tell him about the zombie attack, although he will disbelieve you.

Gudrik will then lead you to a fire, where Ned Swarbrick and Digory can be found, you may chat to them if you wish, although it is not required. You must now cook the raw minnows to in order to make cooked minnows. 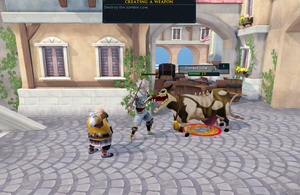 Poke it to make sure it's dead.

Follow Gudrik again, and you will come across a dead cow, situated next to an overturned market stall. Approach it, and it will rise to life, becoming a zombie cow. Like the zombies beforehand, it is very easy, and you are still immune to death, so you will have no trouble defeating it. After you have defeated it, your rusty bronze sword will shatter, and you may proceed to the quarry by the shore to the east to forge a new weapon. You may also head south of where you fought the cow to speak to Magda and learn more about the history of Gielinor and Ashdale.

When you reach the quarry, Gudrik will order you to mine one copper ore and one tin ore from the nearby rocks. He will then lead you up to a furnace to the south, where you must make a bronze bar, before proceeding to use the nearby anvil to turn the bar into a bronze sword, replacing the one which was broken during your fight against the zombie cow earlier. 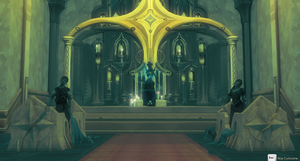 Morwenna the necromancer appears and unleashes some zombies from some nearby coffins.

After you make the sword, you'll hear a screaming noise. Gudrik will identify it as coming from the church to the east, and lead you there. If you stop to chat to Sarah along the way, she will explain that she heard what sounded like a thunderclap in the church, and begs you to investigate. 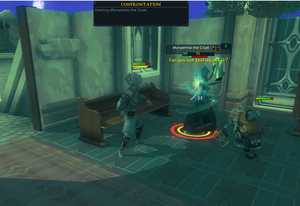 In battle with Morwenna.

Inside you will find a zombie necromancer called Morwenna the Cruel, the one responsible for the previous zombie attacks, who then proceeds to envelop the church in fog and raise two zombies from some nearby coffins, which attack you and Gudrik. Gudrik will kill one of the attacking zombies, but you will have to defeat the other yourself. Like the early zombies, it is easy to defeat, and once killed, you will be given the Kick ability, and Morwenna will summon another pair of Zombies. Like the first pair, Gudrik will kill one, and you must kill the other.

Once the second set of zombies are defeated, Morwenna will teleport down to fight you herself. She is significantly tougher than the zombies you defeated beforehand, although you are still incapable of dying. She is capable of stunning you, and will periodically teleport around the church, meaning you will have to follow her around. She will also occasionally summon a magic shield around her, which you can disable by using the Kick ability. 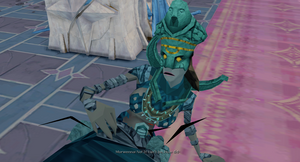 Morwenna is at your mercy and disintergrates.

Once Morwenna is defeated, she will explode, causing the fog around the church to disperse, and dropping her headdress for you to collect and wear if you so choose. You can then follow Gudrik out of the church, and find a small crowd of celebrating citizens, including Sarah, Digory and Hendrik, who will thank you for rescuing them. Gudrik will tell you to talk to the celebrating islanders if you wish, and asks you to follow him down to the harbour to the south when you're ready.

At the harbour, Gudrik will answer any questions you have, and will explain that Morwenna was a necromancer from the Fourth Age, and that she was raised from the dead by someone, and came after Gudrik because he disturbed her tomb on an adventure. When you're ready to leave the island, he'll tell you to get on the boat via the gangplank.

The boat will take the pair of you to Taverley, where you can talk to Gudrik again to finish the tutorial. He'll give new players an enchanted gem as a reward for their efforts, which allows them to talk to him, and becomes their mentor, and will advise then on what to do via the Paths system.

This information has been compiled as part of the update history project. Some updates may not be included - see here for how to help out!
Retrieved from ‘https://runescape.wiki/w/Ashdale_Tutorial?oldid=35713832’
Categories:
Hidden category: