Throughout the cavern, frost dragon bones can appear near the edges of the dungeon. However, they cannot be obtained even with Telekinetic Grab, as they were intended to distract bots who would attempt to pick them up at the time. 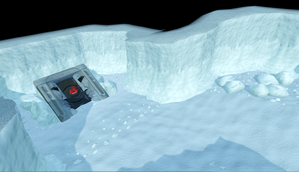 Inside the resource dungeon[edit | edit source]

Inside is an icy cavern that contains 15 frost dragons, 8 on the eastern side, 7 on the western side. They are often killed for their bones, as they are currently 28,595 each. The frost dragons themselves may also be killed as part of a Creature of Daemonheim or dragon cluster task.

This information has been compiled as part of the update history project. Some updates may not be included - see here for how to help out!
Retrieved from ‘https://runescape.wiki/w/Asgarnian_Ice_Dungeon_resource_dungeon?oldid=35760755’
Category:
Hidden categories: