From the RuneScape Wiki, the wiki for all things RuneScape
(Redirected from Arzinian Mine)
Jump to: navigation, search
The Old School RuneScape Wiki also has an article on: osrsw:Dondakan's mine

Dondakan's mine, also known as Arzinian gold mine, is just south-west of the dwarven capital city of Keldagrim. To access the mines, players must have completed the quest Between a Rock... and have a gold helmet or golden mining helmet equipped. They must then speak to Dondakan, a dwarf which stands near the entrance. He will then shoot them into the mine using his dwarf multicannon. To leave the mine, simply unequip the helmet or log out.

After the quest Forgiveness of a Chaos Dwarf, a new route between the bank and the gold mine is unlocked: a small door is added on the north side of the small tower just north of the boatman who hauls ore, creating a shortcut that allows players to bypass the ferryman and boatman completely by passing through the tower (the building where you kill the dwarf cannoner early on in the quest) to get to the bank fairly quickly. 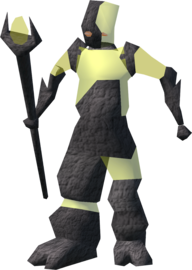 The Arzinian Mine was discovered by the dwarves of Keldagrim during the early Third Age, after the God Wars forced them to flee from what is now the Fremennik Province and take shelter beneath the surface. Keldagrim, which was still very young and underdeveloped at the time, had already begun to rely primarily on mining, resulting in the digging of extremely complex mining networks. The Arzinian Mine was found in what is sometimes referred to as the Keldagrim south-west mine by dwarves commissioned under the Council of the Elder Magi.

The mines were found to be connected to Gielinor through a small dimensional rift, leading to what may be part of Bordanzan or what could also be simply a dimensional pocket. The early history of the caves themselves remain unclear, although it has been noted that the centre of the tunnels bears some resemblance to the symbol of the deity Zaros. The mines were heavily used initially, but at some point the Arzinian Avatar was discovered in the deepest confines of the network. The creature forced the miners from the caves, although it itself was trapped by them. The mine was sealed by the Arzinian after its entrapment, who took all the debris and forced it into a single rock. It was eventually forgotten by the dwarves of Keldagrim, who set their sights on other veins.

It was not until the Fifth Age that interest in the site was renewed. Dondakan, the father of the Keldagrim-Branch Dwarven Black Guard Commander Veldaban, discovered the site while working for the Consortium. Where the rift had once been, a seemingly impenetrable rock now stood. For unclear reasons, Dondakan believed that penetrating the rock would lead to great wealth, so he devoted eighteen years of his life to opening it.

Dondakan exhausted nearly all of his wealth on various methods to open the rock, all of which were unsuccessful. Dondakan used, amongst other methods, complex mining gear, dwarf multi-cannons, and granite boots. As the rock continued to resist, Dondakan's aid gradually left him. It is only during the Between a Rock... quest that Dondakan recruits the help of the player, who finds that the rock can be penetrated with gold. The player enters the rock, where they temporarily defeat the Arzinian Being once again, granting Dondakan access to the mine.

Since finding the Arzinian Mine, Dondakan has become extremely wealthy. Although the Consortium takes much of the profit, he has money to spare, and has purchased areas such as the North Keldagrim mining area.