From the RuneScape Wiki, the wiki for all things RuneScape
Jump to navigation Jump to search
Loading...
NPCOverride

Arteria is a talking sword involved in the Halloween events since 2021. It is created by bringing Greg the discarded sword hilt and blade.

After Greg restores the sword, it is used to kill 20 ravenous skeletons south-west of where Greg is standing. Arteria is controlled through a minigame interface. During this phase, the first two abilities are available: Whirlwind and Leap. After killing the 20 skeletons and talking to Greg again, two more abilities will get unlocked and Greg will require you to kill 50 more skeletons in the nearby area. The last two abilities are unlocked for this phase: Harvest and Annihilate. Finishing this unlocks the Arteria cosmetic which overrides the appearance of two handed weapons. 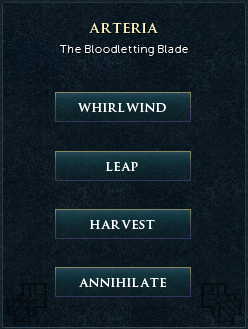 The ability interface when using Arteria.

The Whirlwind ability works similarly to the Hurricane ability; the player spins on the spot, killing the skeletons around them. Can be activated every 1.8 seconds.

The Leap ability uses similar mechanics to Bladed Dive; when the ability is activated, the player selects where on the ground to travel to. The player then leaps in the air, and smashes the ground to kill any surrounding skeletons. Can be activated every 2.4 seconds.

Leap cannot be used to jump through obstacles nor to jump out of the activity area.

The Harvest ability attacks a nearby skeleton with a red ball of energy that looks similar to the signal created with Luna's compass. After killing the first skeleton, the ball chains to another nearby skeleton, killing them and repeating the chain. This can kill up to five skeletons in one use. Can be activated every 12 seconds.

Harvest is the only ability than cannot be used without a nearby valid target.

Annihilate is an ability that, after charging for roughly a second, kills all skeletons immediately. This ability has the longest cooldown of the four (28.2 seconds), but is the most effective to kill the most skeletons possible.

Unlike Harvest, Annihilate can be used without any valid target, wasting the ability and putting it on cooldown.