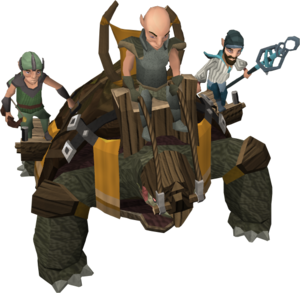 A mage who jumps off the tortoise after it's killed.

The Armoured Tortoise Regiment is a mounted division of the Gnomish Army, defending the front of the Tree Gnome Village at the battlefield to the north, where gnomes desperately battle against the warriors of the Mahjarrat General Khazard. The Regiment is a relatively new addition to the Gnomish Army, having been established in the Year 169 of the Fifth Age, and only two have been introduced into the ranks of the army so far, though Lieutenant Schepbur, the leader of the regiment, seems sure that more will be added once King Bolren has the money for it. Each unit is comprised of a giant tortoise as a mount controlled by a driver and complemented by an archer and mage.

Although the gnomish use of giant tortoises as battle mounts dates back to the late Fourth Age and has aided them in numerous battles such as the Battle of Atarisundri, where the oldest tortoise, Mibbiwocket was the personal mount of King Healthorg, Tortoises have not become a key part in the gnome military until the induction of the Regiment, which has given the gnomes the upper hand in their fight against Khazard.

Still in development, the Regiment's activity can be viewed only in the Tree Gnome Stronghold, where gnomes and tortoises train to be able to fight, and those already active in battle at the Gnome - Khazard Battlefield.