From the RuneScape Wiki, the wiki for all things RuneScape
Jump to: navigation, search
The Old School RuneScape Wiki also has an article on: osrsw:Armour stand
This article is about Armour repair stands. For armour display stands, see Skill Hall#Armour.
Required materials: 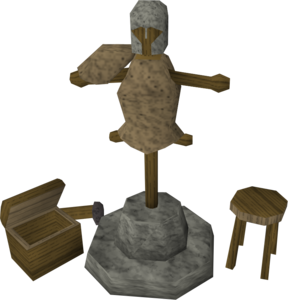 The armour stand is a piece of furniture that can be built in the workshop of a player-owned house. It requires level 55 Construction, 8 oak planks and 1 limestone brick, and can be used to repair many pieces of equipment.

The armour stand can also be used to repair the following degradable items for a price (in coins) which scales with the player's Smithing level. Contrary to popular belief, it is the player's own Smithing level and NOT that of the owner of the stand that applies for the discount. In other words, a player with 1 Smithing will pay 100% of the cost to fix an item even if they are using the armour stand in a house whose owner has 99 Smithing. For a list with prices and charges, see Equipment degradation/List#Armour stand.

It costs less to repair all armour at an armour stand as opposed to paying Repair NPCs.

The following 'junk' items can be repaired on an armour stand to create a random equipment of the relevant type (or broken beyond repair):

When using the calculator, input a repair cost value between 1 and 50000000 coins without using commas.

The formula used to calculate the cost at a repair stand is:

A player with a Smithing level of 60, for instance, would pay 70% of normal cost:

Simply put, every 2 levels in Smithing equals a 1% price reduction compared to any NPC vendor.