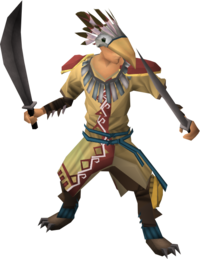 Armadylean ambushers are followers of Armadyl, associated with world event 2. They are capable of using abilities and can run as fast as the player, making them very dangerous if encountered while unprepared. There are two types.

The second type can appear at any PvP area that a Bandos-aligned player is found, and will attack them. They cannot appear anywhere else, and they will not appear for players who are already in combat or under half health. Players can encounter up to three ambushers a day. Once the ambusher appears, any Bandos-aligned player may attack it, and everyone who contributed to killing it has a chance of receiving some sacred metal fragments. The ambusher will disappear on its own if the player takes too long (they stay for about 5 minutes) trying to kill it, or if the player manages to escape and the ambusher is not in combat with another player.

The third kind of ambushers are those that take place in skirmishes, using melee or ranged weapons to fight bandosian battle-mages, bodyguards and ambushers.

Ambushers generate adrenaline as they fight, and can use abilities.

The first thing they typically do upon spawning is attempt to stun their target with Backhand. If this succeeds, they follow up with Punish to deal extra damage. If they fail, or if the target breaks free, they will try to disable the target's protection prayers with Smash. If stunned or bound, they will not use Freedom unless their target is right next to them. This can be exploited to defeat it with relative ease.