From the RuneScape Wiki, the wiki for all things RuneScape
Jump to navigation Jump to search
The Old School RuneScape Wiki also has an article on: osrsw:Armadyl pendantThe RuneScape Classic Wiki also has an article on: classicrsw:Pendant of Armadyl
Item JSON: {"edible":"no","disassembly":"no","stackable":"no","stacksinbank":"yes","death":"always","name":"Armadyl pendant","bankable":"yes","gemw":false,"equipable":"yes","members":"yes","id":"87","release_date":"17 June 2002","restriction":"surface","release_update_post":"Latest RuneScape News (17 June 2002)","lendable":"no","destroy":"Drop","highalch":false,"weight":0.01,"lowalch":false,"tradeable":"no","examine":"Yet another amulet.","noteable":"no"} 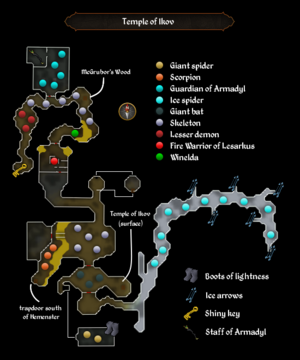 A map of the Temple of Ikov dungeon.

The Armadyl pendant is a pendant used in Temple of Ikov.

The pendant is considered to be an easily obtainable piece of protective equipment from the Armadylean faction inside the God Wars Dungeon.