The Ardougne Sewers are an extensive dungeon system underneath East Ardougne and part of West Ardougne. The whole complex has yet to be explored by players. Currently, players have access to three separate sections of the sewers.

The sewers are not as widely used or known as the Varrock Sewers, but quests require the player to visit some parts of the sewers.

The sections of the sewers are called the "central", "western", and "southern" Ardougne Sewers based on the locations of their main entrances in East Ardougne. The sections appear to be separate from one another, but that is not known for certain. For example, the Western Ardougne Sewer has pipes leading off in many directions, and it is possible that some of the pipes connect to the other sections. It is speculated that future quests will reveal more about this system.

The eastern sewer is little visited, as it has little of much value or interest. It used to be visited for the now removed rat pits. Features of this sewer are:

Players can enter the eastern sewers through Jimmy Dazzler's house after the completion of Rat Catchers or through the manhole near the Estate agent's building.

Level 31 Thieving is required to pick the iron gate's lock when going towards the rat pits from west to east. The gate is not locked going the other way. This previously led to a mine which contained 5 iron rocks and 5 coal rocks, but as of the 7 January 2019 Mining and Smithing rework these have been removed, leaving this end of the sewer empty besides a few Zombies

Another door separates the northern half from the southern half. Rat Catchers must be completed to unlock this door. 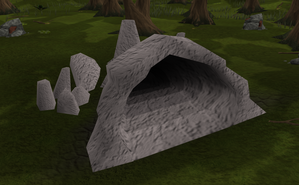 The entrance to the flooded sewers. 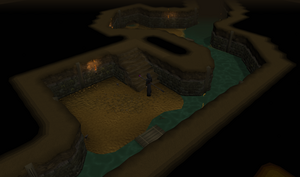 The flooded sewers where the Cult of Hazeel reside.

The southern sewer is only partially explored by players. This sewer is the most flooded of the three, which makes it the most inaccessible. The main entrance, the only one known at present, is a cave east of the Clock Tower south of East Ardougne. This entrance may not be usable until the player has started the Hazeel Cult quest.

During Dishonour among Thieves the player returns to the sewers to recruit Hazeel for Zamorak's team to steal the Stone of Jas from Sliske. Hazeel joins the team on the condition that the player frees Jerrod and recruits him too.

The update history project is a work-in-progress – not all updates to this topic may be covered below. See here for how to help out!
Retrieved from ‘https://runescape.wiki/w/Ardougne_Sewers?oldid=35267707’
Categories:
Hidden categories: