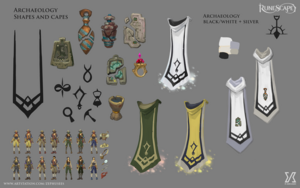 The archaeology hood can be attached to the cape by using one on the other, creating a hooded archaeology cape. It can be detached with a right-click option.

The Archaeology cape's perk provides the ability to access the relic powers interface at banks, and an additional 1% sprite focus is gained whenever some is gained.