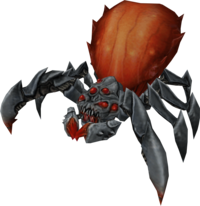 Lana, one of the unlockable Araxyte pets that can be obtained after the base pet drop. 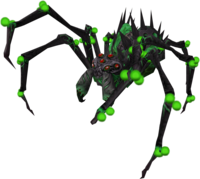 Mallory, the Araxxi pet, obtained as the third rare drop.

Araxyte pets are eight pets obtainable by killing Araxxi and then fulfilling various conditions. A player's first Araxyte pet must be gained as a rare drop from killing Araxxi, with another five then able to be unlocked by fulfilling certain conditions. The last two pets, Barry and Mallory can only be obtained as a rare drop after all 6 previous pets are unlocked, obtained from two separate araxyte egg drops. Unlocking all the pets requires 3 rare drops; the first unlocks any given base pet (Dave, Pete or Steve), the second unlocks Barry, and the third unlocks Mallory.

The chances to get the initial pet vary depending on how much enrage was gained during the kill (the enrage from the start of a kill does not count). The amount of enrage gained which affects the Araxyte pet drop rate is capped at 500% (for example, if the kill is started at 100%, the pet chance caps at 600%).

After the first pet is obtained, it is possible to unlock the rest by completing various challenges during the Araxxor fight; obtaining them as rare drops is not possible. A player may view the conditions for unlocking further pets and their progress towards doing so by inspecting the cocooned corpse outside the Araxyte Hive. When the player meets the requirements to obtain the other pet skins, a message will appear stating that they have unlocked the pet skin after killing Araxxi. While the base pet can be obtained during a duo kill, the unlockable pets can only be obtained during a solo match.

They may be summoned from the follower pets section of the pets interface, accessed from the Customisation tab or by right-clicking the Summoning icon.

There are two commonly agreed ways to increase the chances of obtaining the araxyte base pet drop.

The first method involves keeping Araxxi at fatally low health (3,000 or less) while walking around the arena, as Araxxi accumulates 5% enrage for every attack she performs, which results in a rapid spike in enrage levels to obtain the pet. However, this is relatively dangerous, as a direct attack that is not blocked will likely deal fatal damage, as her auto-attacks can deal over 5,000 damage upon reaching 300% enrage.

The second method is to simply kill Araxxi, then gamble the rewards obtained. This is much faster, but has a lower drop rate as the player is killing Araxxi before she can accumulate enrage. Gambling will remove all rewards, but doubles the drop rate of the pet, which also stacks with the first method. In order to receive the pet, the player must roll a 0 - any other number will result in a failed roll.

The available pets, the Araxyte they resemble and their methods of unlock can be found below.

The base pet is obtained as a rare drop from Araxxi and is determined based on the combat style used during the fight. Multiple pet skins may be unlocked in a single kill, based on the achievements met during the kill.