From the RuneScape Wiki, the wiki for all things RuneScape
Jump to navigation Jump to search
The Old School RuneScape Wiki also has an article on: osrsw:Araxyte
This article is about the race. For other uses, see Araxyte (disambiguation). 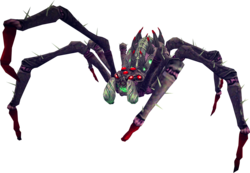 Araxxor, one of the largest Araxyte

The Araxyte are Colossi resembling spiders that inhabit the Araxyte Hive in Morytania. They are larger and more powerful than other known types of spiders and have seven eyes. Araxytes are known to grow to huge sizes from feeding off fear and rage.[1] According to Gavin, Araxytes eat at least eight humans each year.[2]

The Player Owned Farm's spider perk (+3% damage with tier 2) does work on Araxytes. However, it does NOT work on Shattered Worlds's Araxyte mobs.

Age of the Empire[edit | edit source]

During the Second Age in the Zarosian Empire, the araxytes kidnapped many of Senntisten's citizens. They were attracted to the city due to the sculptor Sana's fyrdeeds, who utilised dyes made from insects that they were attracted to. The Zarosian Church were aware of their existence but chose to keep it a secret to prevent panic among the people. Sana created a large fyrdeed to ease the peoples' tensions when they saw fear and arguing among the people, but it ended up attracting the araxytes. Even after the Church protected Sana, the sculptor was ridden with guilt for getting innocents killed and headed to the araxyte den to create a fyrdeed to burn them. As they lit it and left, their foot got tangled on a web and a torrent of araxytes charged at them, but the burning fyrdeed supposedly killed them all. A particularly large araxyte was salvaged from the remains and interred at Senntisten's graveyard in honour of Sana's heroic act.

Some araxytes were able to escape, although it is not known if the current hive was the one mentioned during the Second Age. Araxxor and Araxxi lead this hive and are feared by the vampyres of Morytania.