From the RuneScape Wiki, the wiki for all things RuneScape
Jump to navigation Jump to search
This article is about the room. For the music track, see Aquarium (music track).

The Aquarium is a room in a player-owned house where players can showcase their Fishing skill. Building an Aquarium requires level 63 Construction and 200,000 coins. The room was suggested on the forums and chosen by players in a Player Power poll. The Aquarium can only be built on the ground level, and has 4 doors. Players can only have one Aquarium at a time, but it can be removed and placed somewhere else without losing any progress. The Aquarium is one of the few updates for which a design document was made public. 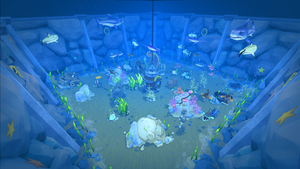 A player diving in their aquarium

There are five types of hotspots available and special objects for underwater usage:

Before purchasing prawn perks, the player will receive either a prawn ball, prawn cracker or golden prawn cracker for every 35,000 life points worth of fish fished. The prawn balls can be opened by one player, while the crackers have to be used on another player. Both players will receive a reward. Once in a while when fishing, you will receive a golden fish egg of the type you are fishing, so long as you don't already have that egg. You can also get golden fish eggs from prawn balls or crackers, from golden prawn crackers, from the Motherlode Maw, or once from the Prawnbroker. Players may toggle the option to receive prawn balls while fishing by talking to the Prawnbroker. 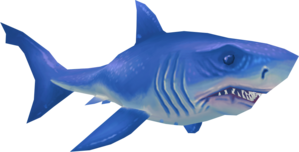 There are fourteen golden fish eggs to collect, and you can put the eggs in the bathysphere to make a fish appear in your aquarium. Right-clicking the bathysphere gives you the option to view your fish list showing you which fish you have found and which ones you still need. Each egg collected will let you unlock one of the fifteen prawn perks at the Prawnbroker. You can also get four more prawn perks by collecting 1, 20, 100 and 200 prawn balls. Unlocking 15 prawn perks is a requirement for the completionist cape, and collecting all 18 prawn perks is a requirement for the trimmed completionist cape.

An additional aquatic creature, the great white shark, is unlocked at the same time Sayln the Shark is purchased from the prawnbroker. Unlike the other creatures, the Great white shark is not lost when the plug is pulled.

If the aquarium is removed, any fish unlocked remain after the room is rebuilt, but all furniture will be lost.

When you get a Golden mystery egg, save it to use on your last/hardest eggs. If, for example, you don't want to fish in the Living rock caverns, wait to open your mystery egg until all the others are collected - that will force it to be a golden rocktail egg. If you don't have a mystery egg, ask people because many players will have a stockpile of left over and essentially useless Golden Prawn Crackers.

Because you receive prawn balls based on how many life points the fish heal, you should generally catch fish that give the highest life points per hour, until you've received that egg, and then potentially move on to the next best. This table lists the 14 fish approximately in order of life points fished per hour at 99 Fishing. Using a rod with the Polishing perk can also upgrade eggs; if the player were to catch a monkfish which provided a monkfish egg, the perk would not only upgrade the monkfish to a shark, but also the golden monkfish eggs to golden shark eggs. If the new egg has already been added to the aquarium, the received egg will be destroyed.

If you are 99 Fishing, you can get 50 free Prawn balls by talking to the Prawnbroker, which should be done first as it may provide your first Golden eggs and Prawn pennies/pounds. As eggs are caught, they should be added to the aquarium and the rewarded Perks cashed in.

The recommended order of Perks is: 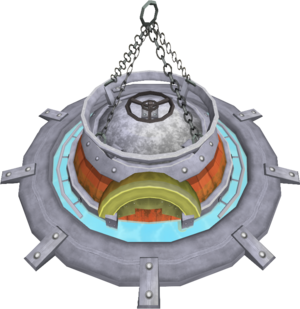 Surface view of the Bathysphere 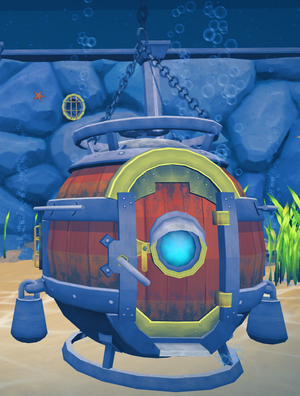 Underwater view of the Bathysphere

The bathysphere is an uncustomisable part of the surface level of the Aquarium. It allows the player to traverse down into the underwater portion of the Aquarium. When activated through building mode, the bathysphere allows access to the customisation interface for the underwater portion of the aquarium. The maximum number of objects that can be placed inside the aquarium is 30.

Right-click options on bathysphere are:

The prawnbroker lets players unlock prawn perks, which improve Fishing in a variety of ways. You can also toggle the passive prawn perks effects and prawn ball drops with the prawnbroker or through Gameplay Settings. The different types of prawnbrokers function in exactly the same way; they are only cosmetically different.

The underwater portion of the Aquarium is uniquely different from the rest of Construction. It has its own hotspot creation tool where items are obtained from prawn balls and prawn crackers or obtained by default. Items removed using the right-click option on the aquarium construction screen are not destroyed but sent back into your pool of buildable items.

Players can purchase Prawn Perks from the Prawnbroker by collecting golden fish eggs.

Once the Aquarium has been filled with all fourteen fish and all perks, the Standard plug decoration can be pulled whilst in normal mode within the house. It will reset the Aquarium's caught fish but the Prawn Perks and underwater decorations will not be reset. There are warning messages to ensure that the player understands what will happen by using the plug to prestige.

To remove the first plug and gain the first prestige you must have a plug already in the aquarium. Go into Building Mode click on the Bathesphere and Select Plugs. From the drop down list select the 1st plug and a green square will appear, clicking anywhere within the aquarium whilst it is completely green will place the plug. Exit Building Mode and click on the bathysphere and you will be able to Pull the Plug you just placed, right click the plug and select remove.