Ingald Belger the apothecary is a man who runs an Apothecary in southwest Varrock. He claims that he is 'quite the expert' on poisons, and appears to know of Pox, for whom he still has great fondness. The Apothecary possessed an airtight pot which he claimed was a family heirloom.

His zombie counterpart in New Varrock also plays a small role in Dimension of Disaster: Curse of Arrav, where he is used to make a potion for Dr Harlow. He also provides a potion to make Romeo appear dead, as part of the New Varrock Tasks.

He is listed in the Varrock Census taken in Year 160 of the Fifth Age.

The Apothecary makes potions for players if they provide him with ingredients: 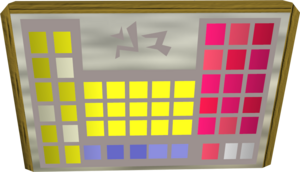 The periodic table of the elements. Gielinor seems to have many fewer elements than the real world.
Retrieved from ‘https://runescape.wiki/w/Apothecary?oldid=35592721’
Categories:
Hidden categories: