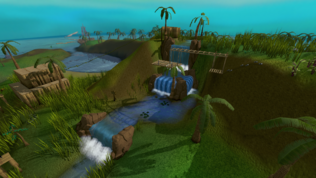 The Ape Atoll Agility course is located near Marim, Ape Atoll. It is a higher level Agility course, requiring level 48 Agility (cannot be boosted) to use. Around Level 65 Agility is recommended so that the player fails fewer obstacles; at level 70, failure no longer occurs.

A Ninja Greegree (other types of monkeys are not agile enough to use the course) and completion of Chapter 2 of Monkey Madness is also required to use the course. The first obstacle is located at the bottom of the waterfall; it is a rock. Players can use the Ape Atoll Teleport spell to reach a location close to the course; this requires completion of the Recipe for Disaster subquest, Freeing King Awowogei. Players who have completed A Fairy Tale III - Battle at Ork's Rift can use fairy ring code CLR to teleport directly to the course. The player must first clear the log (no items required to clear) and use a small ninja greegree to go through. This will take players to the middle of the course; using the rope swing to cross the river, then using the vine to climb down the hillside will take the player to the beginning of the course. Running around the hillside and using the stepping stone to cross back over the river will then start a new lap of the course. A perfect lap of the course provides 580 experience points.

The fastest possible lap of the Ape Atoll agility course is 65 game ticks, or 42 seconds. A maximum of 85.7 laps can be completed per hour, at 580 experience each, for a maximum of 49,706 experience. Anyone over level 70 Agility can potentially obtain the maximum experience rate, as failure becomes impossible at this level. Familiars and pets cannot be used on this course.

You may wish to change to human to talk to the Talent Scout or to use a teleport or other spell. Remember that poisonous scorpions are around, so either have some anti-poison potions on hand (or the poison-purge aura), be ready to eat, pray vs melee or, where appropriate, use a safe spot such as the upstairs of the small building.

The final obstacle (climb-down) gives 100xp and 300 xp bonus if you've completed the whole course. This brings the total for the course to 580xp. It is possible to fail the last climb down, resulting in the loss of more than half of the total experience received from one lap, prior to level 70 Agility. Note that the only way to get only the base experience for the last obstacle, and not the bonus experience, is finish a lap, get off Ape Atoll, and go to a fairy ring, teleport to the fairy ring CLR, and go through the final part of the course again.

When the player has clicked on the last climb down, already right click the menu of the first jump, so the player can easily walk to it when the player is down the climb-down, this saves a few seconds every lap. The fastest lap times for this course are approximately 38–40 seconds, with most players averaging 45 seconds per lap. An alternative method is to note the position of the rock on the screen immediately after coming off of the vine. By positioning one of the boxes on the screen as a reference point, players may easily position the mouse for where the rock will be prior to the end of their climb down the vine. Then they may immediately click the rock to continue progress through the course. This method also avoids problems that come during the occasional glitch while climbing down the vine.