The shield has identical stats to the bronze kiteshield, but also has the ability to reduce the damage taken from the magical fire-breath of dragons. When used alongside an antifire potion, the damage is nullified. This does not apply to the special attacks of the King Black Dragon and any dragonfire from the Queen Black Dragon.

The shield can by modified by attaching a clingy mole to turn it into an anti-dragon shield (mole). This requires level 45 Crafting to do so. Members can attach a draconic visage to the shield to turn it into a dragonfire shield, deflector or ward, a more powerful version of the shield. Doing so requires level 90 Smithing. Alternatively, Oziach can be paid 1,250,000 coins to attach the visage, for those without the necessary Smithing level. 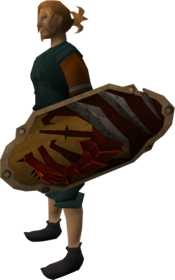 In the Dragon Slayer quest, the player will need this shield. If it is not used, Elvarg can hit up to 688 life points.