From the RuneScape Wiki, the wiki for all things RuneScape
Jump to navigation Jump to search
The Old School RuneScape Wiki also has an article on: osrsw:Anima Mundi
For other uses, see Anima (disambiguation). 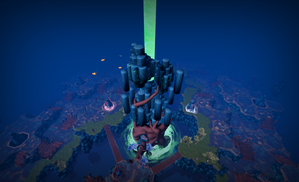 Gielinor's anima flows through the Heart.

Anima is the living energy of the universe and the source of magic. It is the substance the Elder Gods feed on to nourish their eggs and perpetuate the cycle of the Elder Gods and thus the universe.[1][2][3][4] If an elder god does not consume the necessary amount of anima, it can become malformed, like Mah did on Freneskae.[5]

Anima is easy to manipulate, and takes on a resonance of the area around it. It can be carefully manipulated to create spells. Magic is, essentially, the manipulation of anima.[6][7][8] Small amounts of anima can be very specifically shaped into cosmic energy.[9]

In living beings, anima keeps the body active and vital. Throughout their life, living beings absorb anima through food, breathing and, to a lesser extent, through ambience. It is possible for some species to be inefficient at absorbing anima, which can cause infertility, as is the case with the ilujanka.[10] Living beings also generate anima.

In worlds with unbalanced anima, conscious life can unintentionally spring about. Zaros believes that conscious beings are able to generate more anima than plants and simple organisms, something the Elder Gods may not be aware of.[11]

The anima of a creature is contained within its soul. Each soul creates a unique resonance in the anima.[12] The strength of a soul is determined by the experiences faced by the creature over the course of its life. As such, the soul of a hero is stronger than average, and it is part of the reason why undead heroes are stronger.[13][14]

During his trips to Iaia to find a cure to the ilujanka's infertility, Kerapac discovered that Iaia's anima is purer, more filtered, than that of other worlds. While it is a world brimming with life, the ilujanka are not able to absorb Iaia's anima properly, suggesting that worlds with purer anima are unsuited for sapient life.[15]

Vindicta, an ilujanka born and raised in Gielinor, is larger than her father, born on Iaia, presumably as a result of Gielinor's anima.[16]

By absorbing a huge amount of anima, it is possible for a sentient being to ascend to godhood. For animals, it is possible to become a colossus, a status similar to godhood.[17] Divinity grants a being a huge amount of power. It also stops the aging process, removes the need for material sustenance and makes beings unkillable by normal methods.[18]

During the Colossal Period, colossi appeared not to exceed the intelligence they were born with. However, in the second half of the First Age, the bloom of civilisation resonated within the anima mundi and, the colossi, who sustain themselves with the anima mundi, absorbed this resonance and began to develop a higher level of intelligence.[18][19]

Teleportation magic temporarily pierces the Abyss, which causes anima from the teleport user's world to leak into it. Over time, this anima has consolidated into amalgams of different worlds. These worlds are inhabited by abyssal creatures, who absorb this anima and are altered by it, taking on the appearance of creatures from these worlds.[20]

Long ago, a temple was constructed south of Lumbridge to guard a portal to the Abyss. The anima witch, an exiled Void Knight, broke the seals and opened a way to the shattered worlds from Gielinor, causing its anima to leak into the Abyss. By siphoning corrupted anima, she has increased her power and reversed her aging process. The Abyssal Knights, an alliance between Void Knights and Temple Knights, are currently retrieving anima from the shattered worlds to close the portals the anima witch has opened and restore Gielinor's anima.[21]

The Anima Mundi as referred to by the gnomes, also known as the animasphere[22] or the runescape[23] is the life force that exists within all things.[24] It is a byproduct of a balanced ecosystem: the closer to perfection the world is, the stronger the anima mundi becomes, and since Gielinor is the most perfectly balanced world, it has the most anima mundi.[25] In effect, anima mundi was created by the Elder Gods, since they created all of the worlds, and they plan to utilise Gielinor's anima mundi again to enact The Great Revision. Guthix had attempted to balance the anima mundi on Gielinor to stop the Elder Gods from awakening, but his goal was hampered by the God Wars.[26] In addition, as of late, the anima mundi on Gielinor is 'bleeding' and it could disappear completely (along with the creatures connected to it, such as Vorago and spirit trees) if the ecosystem is too unbalanced.[27][28]

The anima mundi is sacred to the gnomes, for they believe it to be the "soul" of all living creatures, kept in check by Guthix.[29] They also consider Seren to be an aspect of the anima mundi.[30] The anima mundi seems to be an integral part of the world itself, without which it cannot exist. The anima mundi is very important to the spirit trees, as they use it not only as a means to survive, but to commune with one another as well.[31] If they are separated from the anima mundi, they become weakened and corrupted, and slowly lose their life force until they die.[28]

The anima mundi is known to be able to create very powerful beings to protect itself, as evident by the existence of Vorago, Solak, Telos and Seiryu the Azure Serpent.[32] The anima mundi on Mazcab also created such beings as Yakamaru.[33][34]

Vorago is one of the defenders of the anima mundi.[35] He killed Tuska and participates in Sliske's Endgame to claim the Stone of Jas. If he encounters Armadyl within the maze, he criticises him for causing damage to the anima mundi during his battle with Bandos.[36]

The island Kami-shima in Wushanko is surrounded by a barrier of anima created by the anima mundi.[37][38] The island is said to come to life and create creatures to defend itself.

Kami believes herself to have been created by the anima mundi.[39]

The sea creatures of Wushanko appear to have a strong connection to the anima mundi, as Kami is able to feel them and such feeling is similar to the one she gets near divination craters. She can also feel their emotions.[40] While all creatures have some amount of anima, the seasingers also refer to the sea creatures as Kami, suggesting that this connection to the Anima Mundi is especially strong in them.[41]

Gail believed that the anima would not permit overuse of the Needle.[42]

Nexuses are the areas where the currents of the anima mundi have concentrated the greatest amount of anima. They vary from being permanent or impermanent, mobile or immobile. They are all powerful sources of magic.[43] A permanent nexus exists on Kami-Shima, where it birthed the Guardians of the East,[44] along with the kami.

In the present day, gods and magic-users hinder the growth of nexuses by constantly siphoning energy from the anima mundi. In the Time of the Colossi, before the First Age, the growth of the nexuses was unchecked, and they grew so powerful that they could transform animals into the godlike colossi.[45] When the gods arrived in the First Age, they also fought over control of these nexuses.[46]

The Heart of Gielinor is a focus for the anima mundi.[47] The planet's anima flows through it and is then "pumped" somewhere else.[48] It is where Jas resides. 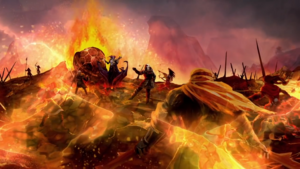 At the end of the Third Age, the world had been so damaged by the Gielinorian God Wars that the anima mundi itself cried out, waking Guthix and prompting him to banish the young gods.[49]

The gnome Glouphrie is known to be conducting experiments involving the anima mundi within his hidden city, Arposandra. This has allowed him to create large amounts of warped terrorbirds and warped tortoises, among other things.

Apparently, interfering with the anima mundi creates massive amounts of waste material, as is evident in the Poison Waste in southern Isafdar. It is here that Arposandra dumps the sewage made by its experiments, which slowly destroy more of Isafdar each day. The substance itself is very sticky and full of explosive chemical compounds. It has also made the area's life energy very weak, and nearly caused the death of at least one spirit tree.

During Heart of Stone, Xenia attempts to siphon the anima mundi of Gielinor away from the Elder Gods to prevent them from waking up and consuming Gielinor, but is killed by Ariane.[50]

Tuska was an animal god that fed on the anima mundi of worlds to increase her power.[53] When it threatened Gielinor, it was killed by Vorago.

Shadow anima, a substance toxic to the Elder Gods.

Kerapac attempted to poison the anima mundi with shadow anima, a substance toxic to the Elder Gods.

Hazelmere's connection with the anima mundi gave him a gift for seeing the future.[54]